‘We may not appoint nat’l team manager for Nepal friendlies’ 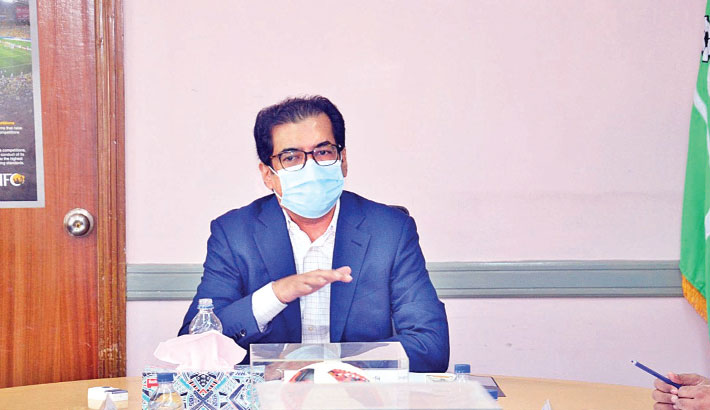 Bangladesh Football Federation (BFF) Vice-president and National Teams Committee chairman Kazi Nabil Ahmed said that they might not appoint a team manager for Bangladesh national football team ahead of the upcoming two-match series against Nepal.

“The decision on the national team manager is still pending. We may not appoint team manager ahead of Nepal friendlies. There was no decision taken on the matter in today’s (Tuesday) meeting. Further decision will be taken after a meeting with the BFF President and Executive Committee,” Nabil told the reporters after the meeting of the National Teams Committee at BFF House in the capital on Tuesday.

The two-match international friendly series between Bangladesh and Nepal, also named as Mujib Barsho FIFA International Football Series 2020: Bangladesh Vs Nepal, is scheduled to be held at the Bangabandhu National Stadium (BNS) in the capital on November 13 and November 17 respectively. The 8-member National Teams Committee held its meeting ahead of the series. It was also the first meeting of the newly formed committee after the recently held BFF election last October.

“Football is not a game of individuals, it is a team game. We needed at least 5-8 weeks to regain our fitness. However, we and our opponents are in the same position at this moment. It is not about only winning and losing, we have to test our strengths through these matches,” he added.

“It was our first meeting after the election. We will get two FIFA windows in March and June. We want to utilise these windows to play matches. The committee talked about its plans for these windows. We have dedicated the series to Mujib Barsho. We have informed the Birth Centenary Celebration National Implementation Committee. Besides, Our Prime Minister Sheikh Hasina is passionate about sports. So, she will closely observe the matches,” the BFF vice-president further said.

Meanwhile, BFF agreed to play the lone away match of joint qualifiers round two for FIFA World Cup 2022 and AFC Asian Cup 2023 on December 4 at Qatar. The host of World Cup 2022 Qatar proposed BFF two dates, December 1 and December 4, for the match last week. Bangladesh opted for December 4. The match is expected to be held at Doha.