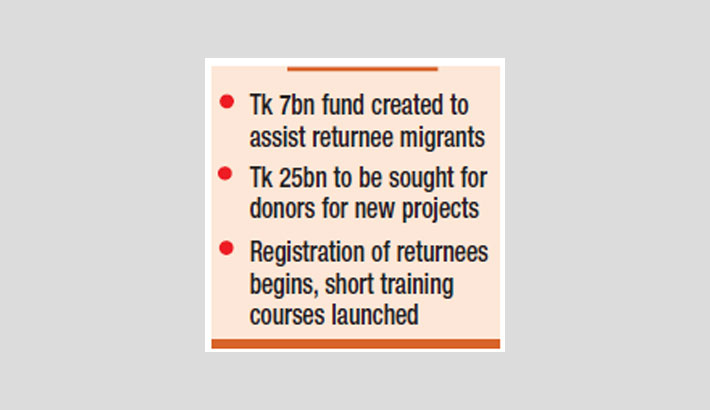 The government has been working with multiple plans to support the returnee migrant workers as a large number of migrant workers continue to return home from different countries in the face of Covid-19 pandemic.

The plans are focusing on registering returnee workers, arranging short training courses, assisting them financially for creating self-employment opportunities, sending them back through negotiation with host countries, and searching for new labour markets.

The Probashi Kalyan Desks at the airports have been collecting information of returnee migrant workers. The government has begun registering returnee workers.

Md Shamsul Alam, director-general of the Bureau of Manpower, Employment and Training (BMET), said, “We are arranging free short training courses for the returnee workers based on their skills and providing Recognition of Prior Learning (RPL) certificates. This certificate will help them get jobs at home and abroad. We are also paying token remuneration to the training participants.” “The Ministry of Expatriates’ Welfare and Overseas Employment, along with the Ministry of Foreign Affairs, is working to send them back,” he added.

On the other hand, the Wage Earners’ Welfare Board (WEWB) has decided to support the affected workers and the family members of deceased workers by providing training and assisting them financially.

The authorities are picking the districts where more workers have returned and prioritising the skills that the workers already have acquired.

As part of the process, a pilot project has been taken up to support 100 returnee male and 100 returnee female workers from 15 districts at an estimated cost of Tk 20 million.

Besides, the government has created two separate funds of Tk 7 billion to assist the returnee workers financially.

Tk 5 billion is provided from the stimulus package of Tk 20 billion slated for the jobless while the Wage Earners’ Welfare Board has allocated another Tk 2 billion to the Probashi Kallyan Bank.

Under the allocation, the returnees are getting low-interest loans from Probashi Kallyan Bank for starting businesses and self-employment activities.

Initially, the government prepared the “Guideline for reintegration loan for the Covid-19 affected Migrant Workers”. But the terms of the loans were complex. The authorities later published a fresh guideline on September 17 relaxing a few conditions. Along with its own fund, the government is seeking donor assistance to rehabilitate the stranded workers.

Wage Earners’ Welfare Board’s Director General Md Hamidur Rahman told that they are looking for a fund of around Tk 20-25 billion to support the returnee migrant workers.

Besides, the World Bank (WB) is going to provide Tk 2 billion for a project to support the stranded migrant workers.

Khadiza Begum, Additional Secretary (Development and Planning Division) of the Ministry of Expatriates’ Welfare and Overseas Employment, said, “We have been preparing a project to be financed by the WB. We already have discussed with the Ministry of Finance regarding the project.”

“After finalising the project proposal we will send it to the Ministry of Planning. We will start implementing it immediately after getting necessary approval. It will surely benefit the stranded and returnee workers,” she added.

On the other hand, the government has been using diplomatic channels to keep Bangladeshi migrants employed in host countries since the beginning of the pandemic.

Official letters have been sent to the countries hosting a large number of Bangladeshi migrant workers.

Foreign Secretary Masud Bin Momen recently said, “Most countries which depend on migrant workers have been going through a critical situation due to Covid-19 outbreak. Their economy is struggling. We are keeping regular contact with them. When they will regain stability, they will allow our workers to enter their country.”

Meanwhile, the Ministry of Foreign Affairs is searching for alternative labour markets for Bangladeshi workers as the traditional labour market is dwindling.

Foreign Minister Dr AK Abdul Momen stated that some African countries including Sudan, Uganda, Tanzania and Gambia, are interested to recruit around 40 lakh Bangladeshi workers in the agriculture sector.

Besides, the government is trying to send some agricultural workers to a few European countries as well.