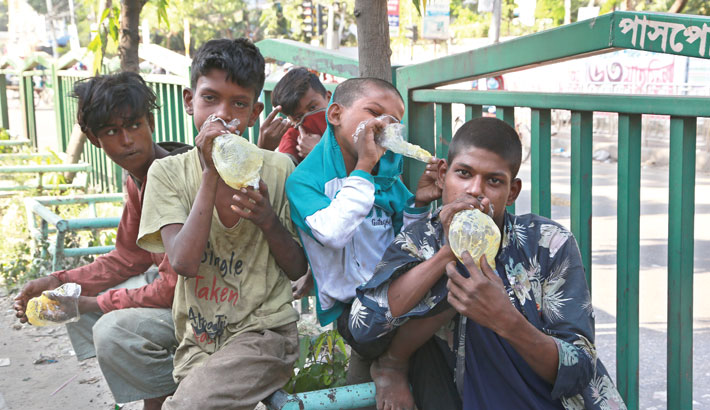 Street children are getting addicted to a new type of drug, locally known as ‘dandy’ (shoe-glue adhesive). The photo taken from the capital’s Arambagh area on Tuesday shows that they are inhaling the drug, sitting on a road divider. – reyad hossain

Street children known as Tokai are increasingly getting addicted to a new drug called ‘dandy’, pushing their lives towards ruination.

Children of the lower income group people, mostly living in city slums are taking this deadly drug, but nobody is coming forward to save them from addiction.

These street urchins are also committing various crimes, including stealing and mugging and they have taken such path of crimes to collect money for buying drugs, city dwellers said.

Street children are taking dandi on open spaces at different points, mainly in and around bus terminals, railway stations, launch terminals, footpaths and footbridges under the very nose of the law enforcers.

A 12-year-old boy Shafiq, who lives with a group of some 15 other urchins in a tiny house in Kamalapur Railway Station area, spends the whole day by collecting rundown metal utensils and other articles known as ‘bhangari.’

Shafiq usually comes back home in the evening and then start taking adhesive drug ‘dandy’ without knowing the consequences of the addiction to this drug.

A number of street children were found taking dandi on open spaces in these major points of the capital.

In Gulistan Zero point and other places, it was also found that many children and some middle-age males are taking this deadly drug.

They are taking this adhesive drug just under the very nose of the passerby, travelers and even members of different law enforcing agencies.

People only witnessing this scene, but none comes forward to save them from  addiction, said Shahida Begum, owner of a footpath tea-stall in Kamalapur Railway Station area.

The number of street children getting addicted to this drug is rising, she added.

About drug addiction of the street children, a narcotics control official said, ‘We recently held a meeting on the issue. We have already brought a number of street children from different city areas. Later, they were handed over to the drug rehabilitation centres.’

He said they have also a plan to hold a dialogue with the department of social welfare on drug abuse by street children as they are one of the main causes of various crimes in the society.

When contacted, Kushum Dewan, Director, operation and intelligence wing of the Drug Control Directorate, told the daily sun: “We have only 1100 employees across the country.

“With such a small man power, it is quite impossible for us to check the flow of the people getting addicted to drugs’ he said.

Replying to a question, Kushum Dewan pointed out that they will launch massive drives against the drug-addicted people, including the street children.

“As part of our move, we will initially take measures to destroy source of this dandi,” Kushum Dewan said.