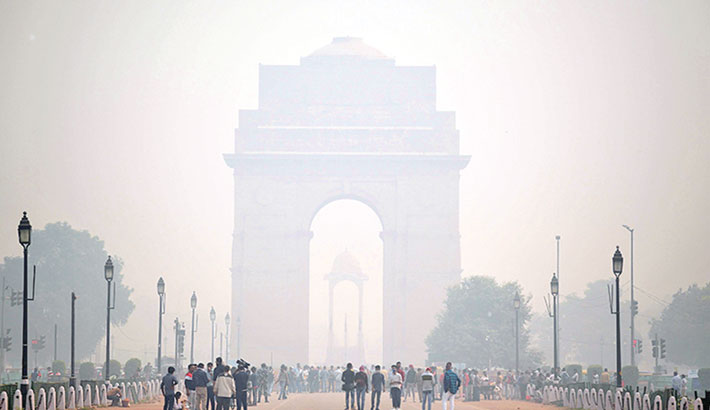 NEW DELHI: Residents of the Indian capital are enduring one of the worst spells of air pollution in years, data released on Monday showed, raising the risks to city residents posed by the novel coronavirus, doctors said, reports Reuters.

Pollution in New Delhi had almost disappeared earlier this year, when the government imposed a nationwide lockdown to stop the coronavirus. But the curbs have been lifted and the pollution, and the virus, are back with a vengeance.

Delhi’s overall air quality index (AQI), which includes the concentration of PM2.5 particles as well as bigger pollutants, has stayed above 400, on a scale of 500, for five consecutive days, government data showed.

The tiny PM2.5 particles can cause cardiovascular and respiratory diseases including lung cancer, and pose a particular risk for people with COVID 19. R.V. Asokan, the honorary secretary-general of the Indian Medical Association that represents 350,000 doctors, told Reuters the air pollution made people more susceptible to coronavirus infection.

“The PM2.5 particles break the nasal passage barrier, weaken the inner lining of lungs, facilitating the spread of the coronavirus infection,” Asokan said.

Doctors and researchers around the world have also reported a link between pollution and deaths in patients whose lungs are weakened by the novel coronavirus.

The five days with an AQI above the 400 level is the longest spell of such heavy pollution in November since 2016. November is usually the worst month for pollution across north India as farmers burn off stubble in their fields and the cooler weather can trap the pollution.

Doctors in Delhi, which has reported a sharp increase in respiratory infections due to the pollution, are fearing a another jump after the Diwali festival on Sunday, which is celebrated with blizzards of smoky firecrackers, even though fireworks have been banned this year.

India’s main environment court, the National Green Tribunal, forbid the sale and use of firecrackers in the city of 20 million people, and neighbouring cities, from Monday to Dec. 1, but some people will inevitably ignore the order.