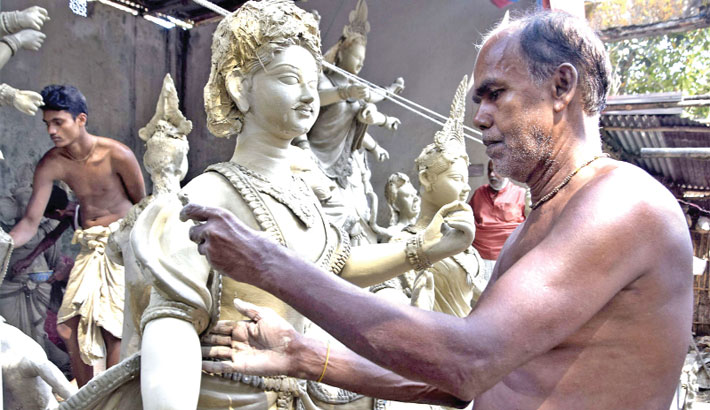 Artisans are giving finishing touches to the idols of Goddess Durga ahead of the Durga Puja, the biggest religious festival of Hindu community, at Anandamayee Ashram in Rangpur Town on Wednesday. — PBA Photo

BOGURA: Idols makers at different places across the country are passing busy time as Durga Puja, the biggest religious festival of the Bangalee Hindus, is only a few days away.

The celebrations will start on October 22 with Maha Sashthi and end with Bijoya Dashami on October 26 with the immersion of idols in rivers and canals.

Artisans at different temples in Bogura town and other places of the district are giving the finishing touches to idols ahead of Durga Puja.

Ahead of the festivals, the clay artisans have been passing busiest time in the year for making the epitome of the gods and goddesses of Hindu community in the different locations of the district despite some reasonable barriers like high price of the materials, starting their activities in late due to corona pandemic and the less price of the each epitome.

District Police sources said around 640 Puja Mandops are supposed to be erected in 12 upazilas this year and due to corona-hit, it is 26 mandops less than the previous year and out all the upazilas, 118 mandops will be erected in sadar upazila in the district.

Clay Artisan Kajal Chandra Pramanik said that at least 30 to 40 artisans have been making epitome of the Durga and other gods and he has got order of the delivery of 17 epitomes within very short time costing at Tk. 15-42 thousand each and before 4 to 5 days of the commencement, they will make clour of each epitome.

Prodip Chandra, another Artisan said that he got order of 8 epitome costing at Tk. 12-38 thousand each and the only source of their yearly income is about to be stopped due to the corona pandemic.

Md Abdur Rashid, Additional Superintendent of Police (Crime) said that three stage-securities like regular policing, mobile duty and striking forces will be deployed in each mandop to ensure stern security for the devotees.

Ali Asraf Bhuiyan, BPM (bar), Superintendent of Police (SP) said that zero tolerance against the law-breakers will be shown during the Puja festival and no mask, no entry will strictly be followed in the mandop area.

“We have already taken adequate security measures. Ansar members and local volunteers will work with police teams to ensure safety during the Durga Puja celebrations,” he added.