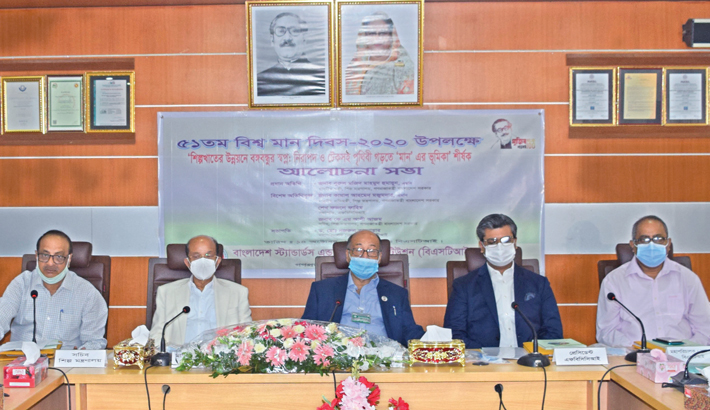 Industries Minister Nurul Majid Mahmud Humayun is seen at a discussion on the occasion of the 51th World Standards Day at BSTI office in the capital on Wednesday. BSTI Director General Dr Md Nazrul Anwar presided over the discussion.

“Bangladesh Standards and Testing Institution (BSTI) will have to be upgraded to such a level of development where Bangladesh has reached under the dynamic leadership of Prime Minister Sheikh Hasina,” he said.

The minister came up with the remarks while speaking as the chief guest at a function marking the 51th World Standards Day at BSTI auditorium in the city, said a press release.

Nurul Majid Humayun also called for expanding the activities of BSTI to ensure the quality of the products produced in the factories set up in the villages.

“Quality industrialisation activities need to be intensified to achieve the development targets announced by the government like Vision 2021, Vision 2041 and Delta Plan 2100”, said the minister.

He said the present government has already taken initiative to develop BSTI as a modern quality control and standard setting body. For this purpose, modern laboratories have been set up in the central and departmental level offices of the organisation, he added. The industries minister said the activities of the organization will be further expanded to achieve the goal of strengthening quality industrialization at the grassroots level. He called upon the officers and employees of all levels of BSTI to fulfill their professional responsibilities to enhance the institutional capacity of BSTI to build resistance against counterfeiting and adulteration as well as to create awareness among the people about the quality of products and services. Presided over by BSTI Director General Md Nazrul Anwar, State Minister for Industries Kamal Ahmed Mojumder, Industries Secretary KM Ali Azam and FBCCI President Sheikh Fazle Fahim, were present.