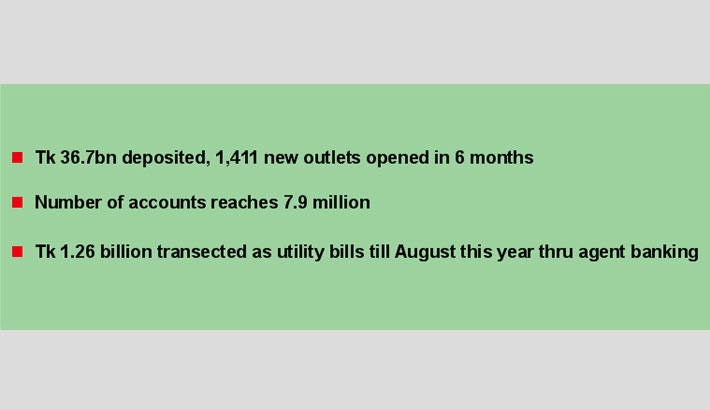 The agent banking service has witnessed tremendous growth both in rural and urban areas since March this year despite the coronavirus pandemic.

Different banks have opened 1,411 new outlets of agent banking and Tk 36.74 billion has been deposited through the agent banking accounts in the last six months from March to August across the country.

Banks have distributed loans of Tk 1.07 billion among the account holders so far. Of the amount, Tk 0.46 billion has been distributed as loans in urban areas while Tk 0.61 billion was disbursed as loans in rural areas.

Bank Asia is the pioneer in the country’s agent banking service system which helps rural people in financial inclusion.

Md Arfan Ali, President and Managing Director of Bank Asia, told the Daily Sun that now banks went to the doorstep of rural people and promoting the habit of saving.

Rural people do not take bank loans as much as the urban depositors do, so the bank has been investing the money in productive sectors to ensure optimum utilization of the deposits and in turn, contributing in strengthening the national economy, he said.

Economic analysts said agent banking has been bringing the rural community under the banking umbrella to accelerate financial inclusion, which was earlier mainly driven by the non-governmental organizations (NGO).

The number of agent banking outlet has been increasing in a rapid pace which is also making a positive change in the rural economic landscape as millions of unbanked people are coming into the fold of the formal financial services, Economists and bankers said.

They said the agent banking had not only brought the unbanked people under the disciplined financial transaction system, but it has also kept an essential role in the rural economic expansion.

About agent banking service, BB guidelines said agent banking is a limited financial service for persons under a valid agency agreement rather than a teller or cashier.

An agent, who is a third-party, conducts banking transactions, such as cash deposit, cash withdrawal, account opening, account inquiries, small-amount loan disbursement, loan recovery, fund transfer and paying bills under the government safety net programme on behalf of a bank. The main purpose of introducing Agent Banking is to provide a safe alternative delivery channel of banking services to the underprivileged, under-served population who generally live in a geographically remote location that are beyond the reach of the traditional banking network.

The Bangladesh Bank introduced agent banking in 2013, giving the first license to Bank Asia. So far 22 commercial banks received the license from the central bank to operate agent banking. Of those banks, 19 banks are operating agent banking network across the country.

This system has increased the money flow and financial transaction in the rural economy and the given informal economic activities into a formal shape, he said.

The CPD research director suggested the commercial banks extend their credit facilities in the rural areas rather than collecting the deposits only.

"Lower credit flow against huge deposit collection through the agent banking will hamper financial equilibrium as that money would be channelled to urban areas only. This is not an equal distribution. So, lending to rural areas will have to be boosted," he added.