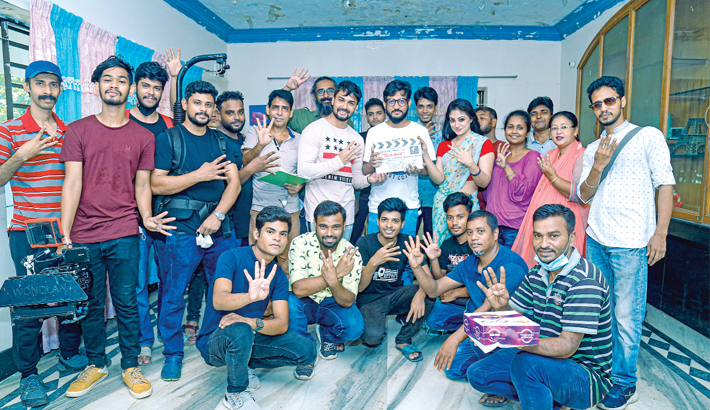 The shooting of the movie ‘Chitkar’ began through its Mahurat at a shooting house in the capital’s Uttara area on Tuesday. AK Azad and Achol Akhe will be seen as lead characters in the movie.

Produced by Cleopatra Films, the movie is directed by Yasir Arafat Jewel. It is a psychological thriller web film, written by Ahadur Rahman.

About the movie, Yasir Arafat said, “I wanted to do a grand Mahurat for the movie. But we could not due to coronavirus. We have started the shooting by maintaining all the health guidelines. Azad and Achol are playing difficult characters in the film. I hope the audience will enjoy something different.”

Achol said, “In the movie, my character is very challenging. For the first time, I am doing this type of character. It will be the best work in my acting career. Hopefully, my fans will not be disappointed.”

AK Azad said, “Ahad bhai (Ahadur Rahman) has written a wonderful story. My role is quite difficult. I have worked with Yasir Arafat Jewel bhai before. He is a very talented director. If I portray my character perfectly it will be a great work.”

‘Chitkar’ also stars Shahed Ali, Sushmita Sinha, and others. Pintu Ghose is the music director of the film while Ruman Paikar is the cinematographer.

Achol Akhe made her debut in the film ‘Bhul’ released in 2011. After the 2013 romantic film ‘Jotil Prem’, Achol’s early years in the film industry were very successful. Her popular films are ‘Bailey Road’, ‘Kistimaat’, ‘Faand: The Trap’, ‘Mental’,  and ‘Aral’.

On the other hand, actor and model AK Azad came to limelight after becoming the champion of Channel i’s reality show, ‘Emami Fair and Handsome – The Ultimate Man’ in 2014. He first appeared in the TV drama ‘Ai Bari Amader’. Then he was seen in numerous small and big screen projects.