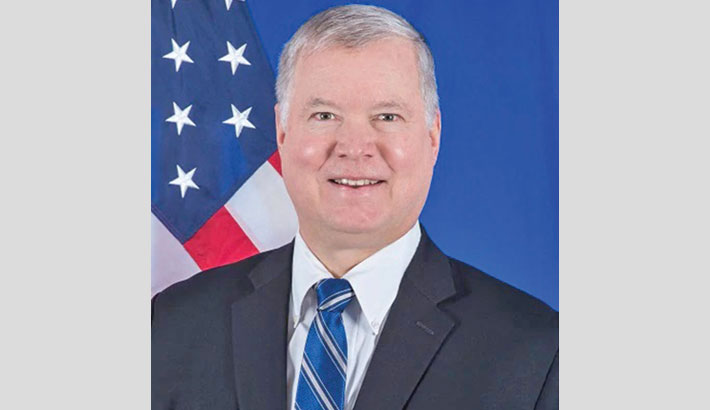 In a move to further strengthen bilateral relations, the Trump administration sent its Deputy Secretary of State in Dhaka to hold discussion with Prime Minister Sheikh Hasina and other high government officials to advance the US-Bangladesh partnership with particular focus on promoting the Indo-Pacific Strategy.

Deputy Secretary of State Stephen E. Biegun arrived in Dhaka on Wednesday on a two-day high-profile visit apparently to intensify American engagements with Bangladesh against the backdrop of Chinese influence in South Asian region, including its huge inroads into Bangladesh.

Diplomatic sources said the United States and Bangladesh cooperate closely on a wide range of issues, including economy, security, governance and development.

“US-Bangladesh ties go beyond the government-to-government level: our people-to-people and commercial relationships complement and expand upon the work of our officials,” said the State Department.

At the last annual partnership dialogue with Bangladesh in June 2019, the two governments reaffirmed their enduring partnership, highlighting close cooperation on security, development, humanitarian assistance and disaster relief, and counterterrorism.  The two governments agreed to continue to work closely together to advance a shared vision of a free, open, inclusive, peaceful, and secure Indo-Pacific region.

As part of his itinerary, Biegun will hold a meeting with Foreign Minister AK Abdul Momen this morning at State Guesthouse Padma where the two sides will discuss entire gamut of bilateral, regional and international issues.

Important issues, like repatriation of Rohingyas to Myanmar, trade and investment, duty and quota-free access of Bangladeshi RMG products to US market, infrastructure development in Bangladesh, maritime security and issues related to Indo-Pacific Strategy (IPS).

He is scheduled to call on Prime Minister Sheikh Hasina at Ganabhaban around noon today when the US Deputy Secretary of State is likely to convey US government’s important message on how the United State and Bangladesh can work together to advance the common vision of a free, open, inclusive, peaceful and secure IPS, an initiative of US with partnering Australia, India and Japan.

Biegun had a meeting followed by dinner with State Minister for Foreign Affairs Md Shahriar Alam at a city hotel on Wednesday evening.

He came to Dhaka directly from New Delhi, India wrapping up his three-day visit there.