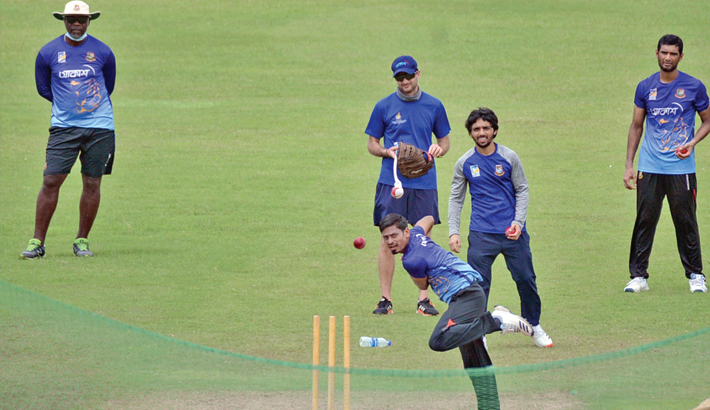 Bangladesh left-arm spinner Taijul Islam bowls during a practice session at the Sher-e-Bangla National Cricket Stadium in the capital on Tuesday.

Bangladesh left-arm spinner Taijul Islam said on Tuesday that he is eyeing to play in all three formats with his remodelled bowling action.

Taijul informed that he is working on his new bowling action and to bring perfection he is taking the help of the Tigers’ spin-bowling consultant Daniel Vettori.

He is regularly bowling against the batsmen at the net practice session as well as at the centre wickets of the Sher-e-Bangla National Cricket Stadium (SBNCS) in Mirpur.

“As of now, I feel no problem despite bowling for a long time. I had some personal bowling sessions. Each player did a one-two hour session. By doing these sessions, the players have been benefited for it for which they could do their work as per their own will,” he told media via BCB after his optional practice session, which was monitored by head coach Russell Domingo, fast-bowling coaching Ottis Gibson and fielding coach Ryan Cook at the SBNCS.

“Confidence level means I have started bowling against batsmen for the last two weeks. Self-confidence has increased. It will also be increased further with the passage of time,” he added.

Taijul had not many variations in his previous bowling action and it was said to be the major reason for not having success across formats.

Keeping those in mind, he consulted with Vettori and decided to change his bowling action in order to get many benefits from it.

According to Taijul, he started getting its reward by bowling against the batsmen.

“Basically the action I had previously was beneficial for me to go bowling place to place. But it’s tough for me to continue bowling in all the three formats of games. There was less intensity of bowling variations in it,” said the 28-year-old spinner, who is thought to be a carbon copy of Shakib Al Hasan’s bowling.

“Vettori told me I could continue bowling in three formats of games with it. Considering different aspects of the bowling, bounce and different diversity, I have changed my

bowling action. Meanwhile, I start getting its reward by bowling against the new action that helps me from the aspect of diversity,” he said further.