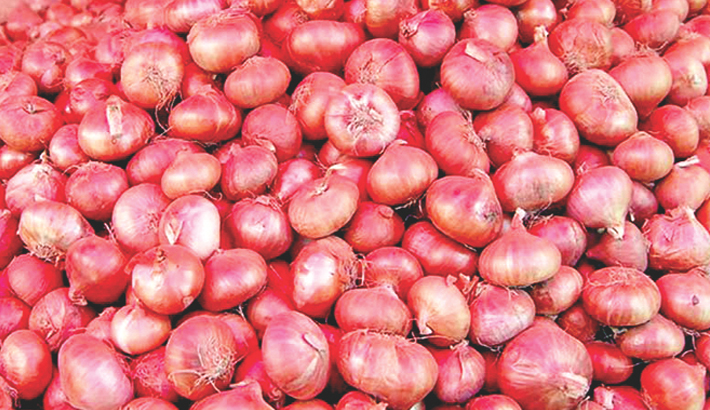 Onion price soared by Tk 40-30 a kg in just day to Tk 100 per kg on Tuesday, triggering outrage among the consumers while the traders are allegedly cashing in the situation to bag hefty profits.

Onion price has started to rise from September, but the latest spell of price hike occurred on Tuesday soon after India imposed a ban on the export of the much-consumed cooking ingredient on Monday.

Onion is a common ingredient in many local dishes and the soaring price of the item is causing a spike in food cost in the country.

The latest spell of price hike has put the common people, especially the low, middle and fixed income groups at a difficult situation and they fear that the price will increase further.

Local onion price has increased by 140 per cent while the price of imported onion jumped by 181 per cent in a month, according to Trading Corporation of Bangladesh (TCB) data.

Prices of local and imported onion have increased by 38 per cent and 63 per cent respectively in a week, TCB said.

Golam Rahman, Chairman of Consumer Association of Bangladesh (CAB), told the Daily Sun that the country has produced enough onion this year but some unscrupulous businessmen hiked the price deliberately.

“Bangladesh is heavily dependent on imported onion from India. This dependency has been creating crisis whenever India puts a ban on its onion export,” he said.

The government should import onion from alternative sources to keep the price stable in the local market, he added.

Heavy rain damaged early-Kharif crop and rabi stock of onion in India, one of the main import source of onion for Bangladesh.

Over the last two weeks, wholesale and retail prices of onion have more than doubled in several markets across India, Indian newspaper ThePrint reports.

In Chattogram, sources at the city’s largest wholesale market at Khatunganj said the important cooking ingredient was selling at Tk 37 per kg on Monday morning and the price jumped to Tk 45 in the afternoon.

Onion was selling at Tk 70 to Tk 75 at the retail markets in the port city on Tuesday.

Market insiders said the price will increase gradually as different quarters will try to cash in the situation.

Besides, sensing the skyrocketing price of the item, the retailers started gathering at the market since Tuesday while those hosting different social events like wedding and mezban also rushed to collect onion at the current price.

The Chittagong Chamber of Commerce and Industry (CCCI) suggested people not to buy additional onion after panicked by the price hike.

They also urged the government to import onion from other countries to meet the demand of the local demand.

CCCI president Mahbubul Alam expressed concern over the price hike of onion and said some wholesaler and traders hiked the price to take advantage of the panic created by the export ban by India.

He also said there is no crisis of onion in the country.

According to the Commerce Ministry, the annual demand for onion in Bangladesh ranges between 2.2 and 2.5 million tonnes. Although the country’s own annual production has risen, so has the amount imported over the last decade.

Last year, onion price witnessed a 557.8 per cent year-on-year rise while the record jump was made in only two months after the Indian export ban. Each kg of the bulb cost about Tk 30 before the ban, according to TCB.

According to TCB data, the price of local onion increased by 542.86 per cent while that of imported one by 572.73 in November last year compared to the corresponding period of the last year.