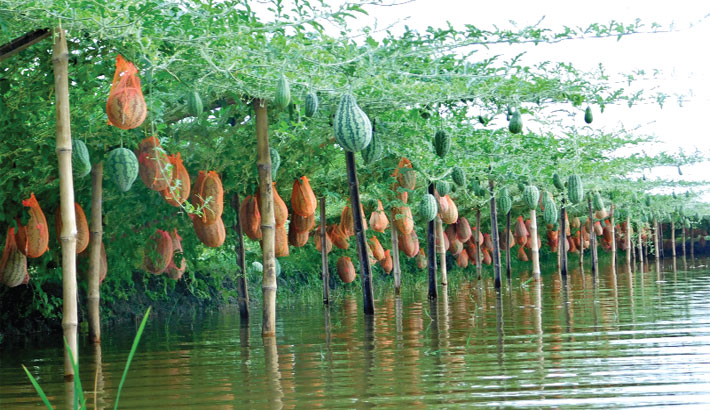 KHULNA: Watermelon, a delicious fruit, hanging from sheds is now a common sight in villages across Dumuria Upazila of Khulna district, where over a hundred farmers are earning profit by cultivating the juicy fruit in the off-season.

The villagers are using traditional “gher” farming to grow the otherwise summer fruit. They dug ponds into fields and make dams around them, making gher or enclosures for the farming.

They cultivated watermelon on bamboo platforms near fish enclosures and brought a marked change in their fate.

Watermelons were hanging like pumpkins on bamboo platforms and the farmers warped those in net bags for their weight management.

According to the farmers, their hard work has brought a tremendous joy for them as the yield is very good.

Due to its good taste, the demand for watermelon has increased in different areas. Many people are coming to see the beautiful scenes of watermelon hanging from platforms.

Impressed by the yield, some are buying watermelon right from the field. Wholesale buyers are also coming to buy watermelon as there is a good demand in the market, said the farmers.

Seeing their success, other farmers in the region are showing interest in watermelon cultivation.

According to the Rupsha Agriculture Department, they encouraged farmers to plant watermelon when they become jobless due to corona restrictions.

Although farmers did not show much interest in the off-season fruit cultivation first, a list of interested farmers was made at the idea of upazila agriculture officers.

Besides, the farmers were trained on how to grow watermelon safely.

According to the Department of Agriculture, each green striped sweet dragon, black diamond and sweet dragon variety of watermelon can grow up to 12 kg, while green spotted variety watermelon up to 2.5 to 3.5 kg.

Farmers can harvest these varieties of watermelon within 60-75 days of planting, according to the department.

Chandra Bairagi, Vibechu Hira, Devyani Mukherjee and Champa Adhikari, from Gowara village and Shuvra Bairagi and Sabuj Bairagi from Natundia village, said they had received watermelon seeds and other materials with the support from the upazila agriculture office.

There is a good yield of watermelon and they are also getting good prices as well due to its high demand in the market, said the farmers.

Rupsha Upazila agriculture officer Fariduzzaman said the off-season watermelons were planted in Natundia and Gowara villages for the first time.

He hoped that watermelon cultivation would increase in the area in the future and assured that the cooperation of the agriculture department would continue.