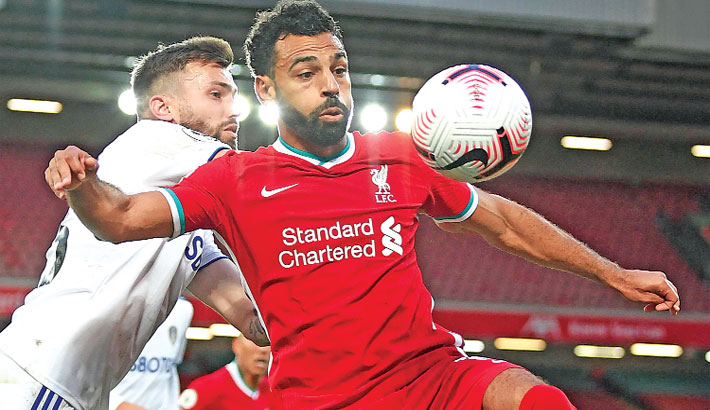 Mohamed Salah's hat-trick saved Liverpool from an opening day stumble as the defending Premier League champions edged Leeds 4-3 on Saturday, while Arsenal had a much more comfortable start against newly-promoted opposition with a 3-0 win at Fulham.

Just 48 days after last season's delayed conclusion, the Premier League returned with a bang as Liverpool and Leeds, on their return to the top-flight after a 16-year absence, served up a feast of goals to open the 2020-21 campaign.

Jurgen Klopp's side cruised to a first league title in 30 years last season, but Liverpool looked more like the wide open side of the German's early days in charge at Anfield as three times Leeds came from behind.

Salah won a fourth-minute penalty when his shot hit Leeds debutant Robin Koch on his outstretched arm and he dispatched the spot-kick himself.

Leeds equalised again in the 30th minute when Van Dijk made a hash of a flicked attempt to clear and Patrick Bamford pounced to guide his shot past Alisson Becker.