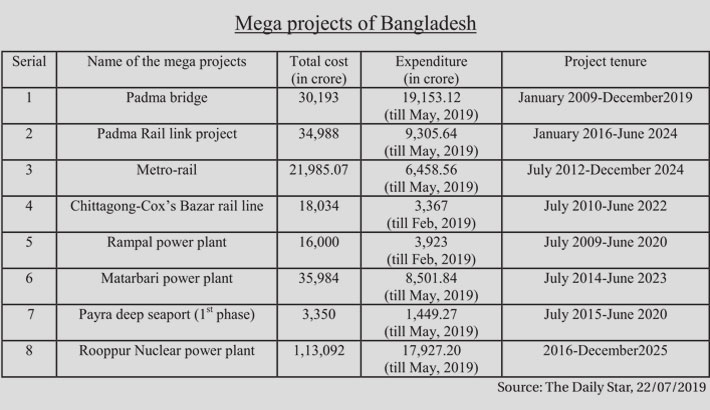 Assume that the family is a tiny state and you are the head of the family, then the question arises in which condition your family will develop itself. If all the members of your family abide by the rules, take their responsibilities in due course or live in discipline and peace, then the development will be ensured. On the contrary, if they do not abide by the rules, there will be chaos and disorders in the family and the development efforts will be jeopardised. All of the development efforts may be attacked or hampered for the unstable situation.

So, existing peace and tranquility, stability and execution of respective duties with loyalty is a precondition for the development of a family, an organisation or a state. Bangladesh lagged behind for years after the assassination of Bangabandhu Sheikh Mujibur Rahman, the Father of the Nation on August 15, 1975 when instabilities in political arena and killing of political leaders started.

In the culture of politics, we often see that when a government changes, then all the development efforts taken are changed or stopped without justification. The new government takes new initiative for development efforts in its own style and method. So, the culture hampers our economic soundness and continuity of development. But democracy, rule of law, good governance and long stability of governments is necessary for our long term development projects’ implementation and economic development. It is especially applicable for our mega development projects which can bring positive growth results in near future. On the other hand, all development activities and efforts which have national interests taken by the governments irrespective of party affiliation must continue. For example, the Upazila system is recognised by all the parties as decentralisation of administration which has proved effective for the nation.

Some mega development projects taken by present government is given below in table:

The mega development projects which are shown in the table will contribute a lot to accelerate our economic development and play a vital role to create employment opportunities in Bangladesh. These mega infrastructures are the strong foundation for economic development. Our unemployed youth can get opportunities to employ themselves in these projects or can be employed in correlated and subsidiary industries/projects. We should keep in mind that the nation must proactively and innovatively provide employment facilities and opportunities to the youths. Else the consequences can be depressing and devastating in the long run. Our young generation is the most valuable asset who can be utilised for nation building activities exclusively.

In the above data, we can see that the tenure of the mega development projects ranges from 05-12 years to implement them. Some projects may take more time for unexpected reasons like natural calamities (Flood, Cyclone, varieties of Pandemic disease etc.), shortage of funds or for any technical or political problems. For example, Padma Bridge’s implementation period or project tenure is January 2009-December 2019 but it has not yet been completed. It may take more time. So, if a state runs into an unstable situation in politics and frequent transition of government within a short period, it may take longer to implement projects or hamper the ongoing development projects and they may not be completed in time. So, stability and discipline is needed in our society and nation for the sake of development. Political stability and development are correlated. Long term projects need a stable socio-political environment.

If we see the condition of our neighbour Afghanistan, Pakistan, Iran, Iraq and other Middle-East or South-African countries which are engaged in internal conflicts or war with other countries, we can see that they lag behind compared to other countries in the world in terms of economic growth and social development. In this competitive world, nations should give attention to their social well-being employing all their resources for production and development oriented activities. Their need-based, market driven, target oriented projects should be prioritised and implemented in the definite time frame. For this reason, political stability is needed for continuing economic development and progress. Bangladesh is now becoming a developing country and has taken various development efforts to be developed. So, a long term peaceful situation and political stability should exist for rapid and sustainable development.