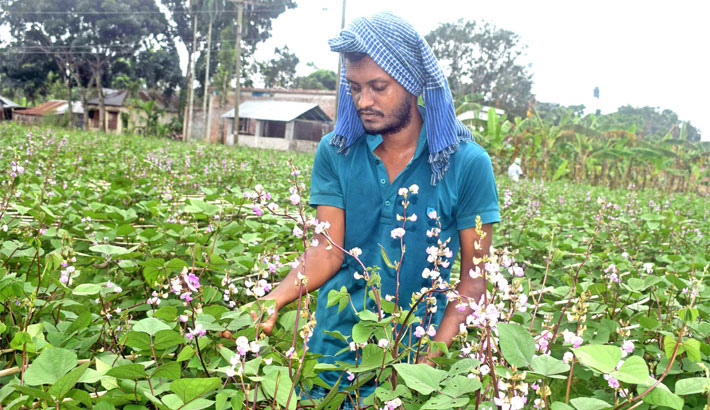 NAOGAON: Early bean cultivation has been gaining popularity in the district after a large number of farmers have involved themselves in bean farming considering good profit in low investment of the vegetable.

The farmers in the district are making good profit from cultivation of early bean in this current season despite low output.

Early varieties of beans have started appearing in Naogaon kitchen market. Farmers are benefiting by getting good price of early variety beans. The cultivation of this bean is known to the farmers as Bhadra bean.

According to the farmers, a part of the profit goes to the control of bean insects. According to the District Agriculture Extension Department, beans have been planted in about 350 hectares of land in the district. Among the early varieties of beans are known as Kartika, Chalta and Kajla.

Early varieties of beans have been planted in the month of Jaistha. Beans will be raised from Bhadra to Magh.

In the beginning, beans were sold for four to five thousand taka. Prices are a little lower when the beans start to rise. Even then, they are sold for at least 450 to 550 taka per maund. One gram of beans will be grown every week. As much as four maunds a month.

Some, including farmers Kamal Uddin and Fayez Ahmed, said they had planted early varieties of red beans. Beans will start sprouting in the next few days. However, this time due to frequent rains, the rotting of bean trees has caused some damage.

Naogaon Sadar Upazila Agriculture Officer AKM Mofidul Islam said a lot of vegetables are planted in Barshail, Baktarpur and Raktitpur Unions of the upazila. Instead of paddy, they grow vegetables in the hope of making more profit.

The Department of Agriculture Extension (DAE) office source said farmers and officials concerned were expecting a satisfactory production of the spice following various government steps but adverse weather condition doused the hopes. But, the cultivators are seen happy over the good market price of the crops, DAE added.

High officials of DAE said, “We have taken adequate steps in collaboration with other departments this season to achieve the fixed production targets. The farmers are cashing much as the demand of the crops is being increased day by day.”

Farmers are benefiting a lot from planting beans in advance, but water has started flowing in the flood-hit areas. Vegetable seeds will be promoted in those areas.