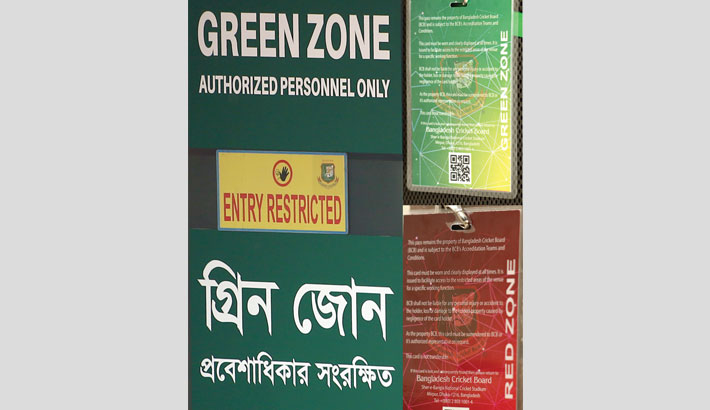 For the last few days, ‘Green Zone and Red Zone’ established themselves as the buzz word in the cricket fraternity of the nation. Bangladesh Cricket Board (BCB) initiated the move to implement zoning regulations at Sher-e-Bangla National Cricket Stadium in the capital as precaution against coronavirus which prompted them to halt the Individual Practice Session for five days before resuming it on September 9.

BCB opted to halt the Individual Practice Session to avert a health hazard and curb the spread of infection in practice sessions prior to the Sri Lanka tour, BCB decided to introduce the zoning regulations.

BCB was initially reluctant to allow cricketers to train but eventually agreed, due to the insistence of a few national cricketers as they were eager to start practicing to prepare for the upcoming tour of Sri Lanka from and completed four phases before announcing the halt of Individual Practice Session after September 3 as corona-like symptoms were detected among some of the member of the support staff.

Cricketers were seen divided into two dressing rooms instead of using just one dressing room which was the custom so far.

It was an appreciable move as it appeared that BCB is leaving no stone unturned to make sure that their cricketers are safe from coronavirus before one person close to cricketers revealed to The Daily Sun on request of anonymity that he is yet to have his coronavirus test.

“I am yet to do my test but probably I will do it in the coming days as it is mandatory for us as well as for others involved,” said the official getting quite embarrassed when the question was tabled in front of him on Thursday.

It was observed that some of the members wearing the accreditation card of the Red Zone were entering Green Zone without any kind of resistance which includes the field, dressing room, gym and indoors.

The Daily Sun spoke with several members with accreditation card and found out that their coronavirus test is yet to be done which only raise the question on what basis this accreditation cards are being distributed along with the viability of all the effort which was taken behind introducing zoning system inside BCB.

BCB Chief Physician Debashish Chowdhury admitted that members of different zones are yet to be tested but added that it will done once the cricketers go into the ‘bio bubble’ when the residential training session of the national team gets underway from September 21.

BCB is preparing to hold a week-long residential camp ahead of their upcoming tour of Sri Lanka and they are planning to keep the players at Pan Pacific Sonargaon hotel in the capital and conduct a closed-door camp in SBNCS.

“We have not tested every individual (accredited for entry to different zones), but we have plans to do it in the coming days and when the team gets into the hotel, the access in the Green Zones will be restricted,” said Debashish.

Bangladesh will travel to Sri Lanka on September 27 while the first Test is scheduled to be held in Kandy from October 24.