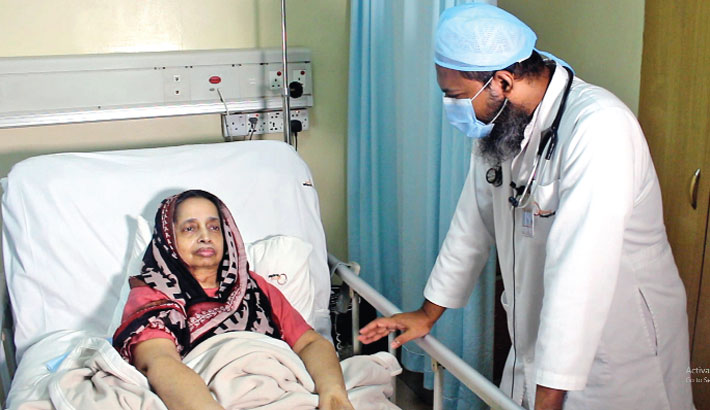 A 68-year-old woman recovered from a stroke for effective management of the disease in United Hospital Limited in the capital.

A team led by Dr SM Hasan Shahriar, consultant at Neurology Department of the hospital, administered the treatment, said a press release.

The woman had also made a recovery from Covid-19 five weeks before she suffered the stroke.

The patient arrived in the hospital two hours after the left side of her body went numb, following a fall which triggered a minor head trauma. As the physicians’ team suspected that it was an acute stroke, they took her to the emergency department of the hospital.

A decision about thrombolysis was taken after getting consent of the patient’s son. Rt-PA (Tissue Plasminogen Activator; Alteplase) started within less than one hour of patient’s arrival, and the patient was transferred to the Stroke Unit. She was monitored in stroke unit and Rt-PA was completed without any complication. After receiving treatment, she improved significantly.

If one can be brought to United Hospital within 3 hours of the first symptoms of an ischemic stroke, after neurological assessment & necessary investigation, a thrombolytic (a “clot-busting” drug) tissue plasminogen activator (tPA) is given by the the skilled Stroke Team to break up blood clots, which improves the chances of recovering from a stroke.