Mominul up for the challenge 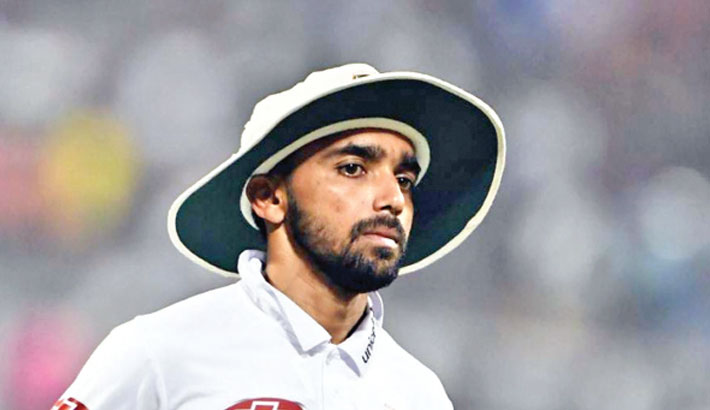 Bangladesh Test skipper Mominul Haque believes that Tigers have the ability to handle the pace attack of Sri Lanka during their upcoming three-match Test series.

Sri Lanka Cricket (SLC)’s Selector Board Chairman Ashantha De Mel on Saturday insisted that it is time for them to switch to pace from spin when Bangladesh tour the island.

“I think we have the ability to take up the challenge of handling their pace attack,” Mominul told The Daily Sun on Saturday.

“If they say that (they want to dominate us) with their pace bowlers, we will form our bowling unit accordingly,” he said.

Mominul added that he is relieved to have Shakib Al Hasan at the middle of the series.

Shakib has resumed cricketing activities from September 5 at Bangladesh Krira Shikkha Protisthan (BKSP) as he is eyeing a comeback in international cricket with his ICC ban set to come to an end very soon.

BCB President Nazmul Hasan has already hinted that Shakib might play the second Test of the upcoming three-match series against Sri Lanka and chances are high that the all-rounder will be flown to the island nation just ahead of the opening Test in order to adapt to the conditions.

Shakib returned home from USA on September 2 after five and a half months and will be training under the watchful eyes of two of his childhood coaches Nazmul Abedin Fahim and Mohammad Salauddin.

The 33-year-old will be free to resume his international cricket career from October 29 after serving a year-long ban imposed by ICC.

“It’s very relieving. As a junior captain I am extremely lucky that I am getting the service of Shakib bhai at the middle of the series,” said Mominul.

“Along the way it creates chances to play well in Test and win it as well. It’s a positive point for any Test captain to have Shakib in his squad,” he said adding that he is confident that Shakib will return to his former glory in no time.

“I am watching from since my childhood and I think he is mentally very strong and can surely overcome this hurdle,” he said.

Bangladesh Cricket Board (BCB) is planning a week-long residential camp ahead of the upcoming tour of Sri Lanka though Shakib will not be part of it due to the ban.

The residential camp is set to begin on September 21 while BCB will conduct COVID-19 Test of the players in three phases ahead of the tour and according to BCB officials they will start getting samples from cricketers from today as they are eyeing to resume individual training sessions from September 9 which will also mark the introduction of red zone and green zone at Sher-e-Bangla National Stadium.

Bangladesh's tour of Sri Lanka which was scheduled for July-August was postponed because of the COVID-19 pandemic.

Bangladesh are expected to travel to Sri Lanka on September 27 for the three-match Test series that is scheduled to commence in Kandy from October 24.