Bangladesh yet to get fillip to FDI inflow 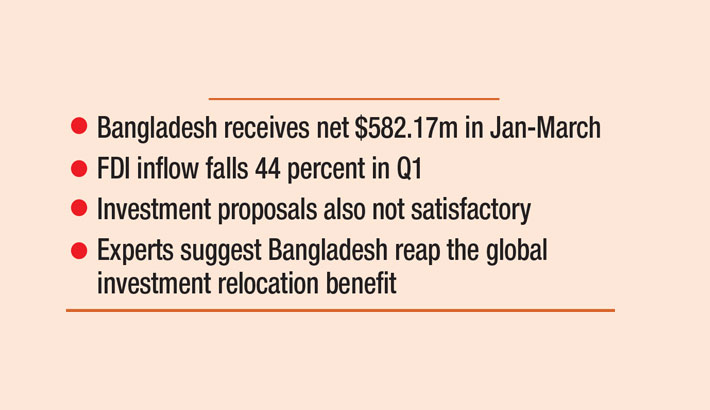 Foreign direct investment (FDI) in Bangladesh still gives a dismal picture as it remains sluggish despite a massive change in policy and incentives offered by the government.

Even, Bangladesh has failed to reap the benefits of the China-US trade war that has resulted in the massive relocation of investment from China to other countries.

While Bangladesh’s FDI flow is still below par, its competitors such as Vietnam, Cambodia and Singapore are witnessing robust growth in foreign investment even amid the coronavirus pandemic.

Bangladesh has received poor foreign direct investment since the beginning of this year. The FDI inflow is projected to be more disappointing due to the ongoing corona crisis.

According to the central bank's latest data, Bangladesh has received a net $582.17 million investment in the first quarter of 2020 which is 44 percent lower than the same period of the last year.

During the January-March period, Bangladesh received only $178 million equity investment while the rest came from reinvested earnings, sources at Bangladesh Bank said.

Economic analysts and experts have attributed the fall in FDI flow to Bangladesh to a strong drive by different countries to attract foreign investment.

They also suggested that Bangladesh should take a desperate move to benefit from relocation of investment from countries like China and Japan.

Dr. Zahid Hussain, the former lead economist of the World Bank, said it is the ideal time to attract FDI which are moving away from different countries through applying all the techniques.

Such relocation of Japanese and American companies from China has opened a new opportunity for Bangladesh, he added.

Sources at BIDA said the scenario of investment proposals is also not satisfactory in 2020 compared to the previous year although Bangladesh is doing good in ease of doing business.

In the April-June period of the current year, Bangladesh has got only eight foreign investment proposals, including five fully foreign and three joint ventures.

Bangladesh saw a record fall in foreign direct investment in 2019, with FDI inflow dropping by 55.8 percent to $1.6 billion, according to a recent UNCTAD report.

UNCTAD in its yearly investment report-2020 has projected that FDI low to developing Asian countries is projected to plunge by 30 percent to 45 percent in 2020 due to the corona pandemic.

In South-East Asia, with FDI rising by 5 percent to a record level of $156 billion, continued to be the region’s growth engine in 2019.

The growth was driven by strong investment mainly in Singapore, Indonesia and Vietnam. The three countries received more than 80 percent of FDI inflow in South-East Asia in 2019, says the report.

Bangladesh in 2018 received $3.61 billion in FDI, the highest ever in the country’s history, with 68 per cent growth over the previous year driven by significant investments in power generation, apparel sector as well as the $1.5 billion acquisition of Akij Group’s United Dhaka Tobacco by Japan Tobacco.

Even many countries have lost interest in investing in Bangladesh as they are frustrated over the process of getting services like land, electricity, water, gas, and other services and clearance from the departments concerned.

Businesspeople and investors have long been demanding a one-stop service or all kinds of services under the same roof in Bangladesh like Myanmar and Philippines to woo investment.

A large number of US and Japanese firms have been relocating to other countries especially in Asian countries, but Bangladesh is failing to grab this opportunity, he said, suggesting that the country should be more proactive in fetching foreign companies.

Policy Research Institute (PRI) executive director Dr. Ahsan Mansur also suggested that the government finds out the reasons why Bangladesh is not getting adequate FDI.