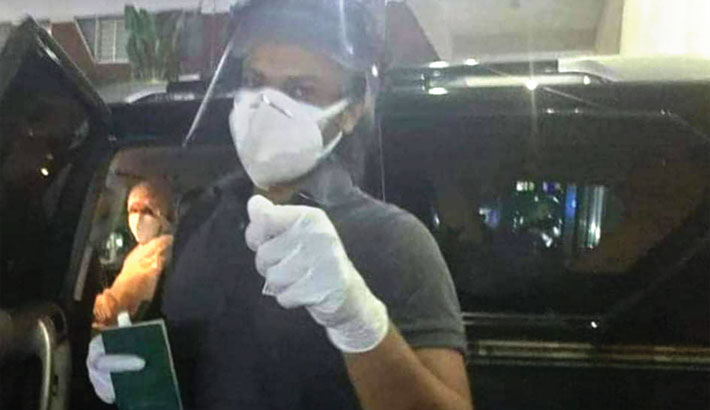 Bangladesh ace all-rounder Shakib Al Hasan returned home from United States of America after a five and half-a-month hiatus on Wednesday to begin his journey towards resuming his cricketing career.

Shakib, who is now serving a year-long ban for hiding conversations with a bookie, is free to resume his international cricket career from October 29 while the all-rounder has made plans to start his cricketing activities shortly after his return depending on the outcome of his coronavirus test report.

However, there is some confusion regarding his plan of action to resume practice in the coming week at Bangladesh Krira Shikkha Protisthan (BKSP) under his childhood mentors, Nazmul Abedin Fahim and Mohammad Salauddin.

According to travel advisories of different countries during the COVID-19 pandemic, every passenger entering Bangladesh from abroad has to go through 14-day quarantine at home.

Bangladesh Cricket Board (BCB) President Nazmul Hasan Papon and ODI skipper Tamim Iqbal had to follow the same rule after returning to Dhaka from England following their respective medical treatments while Tamim had to delay his individual practice session for this reason.

According to Institute of Epidemiology, Disease Control and Research (IEDCR) Principal Scientific Officer ASM Alamgir, the all-rounder must go through a 14-day quarantine.

“Whoever returns back from abroad will have to go through a mandatory 14-day quarantine either at home or at any hotel,” said Alamgir.

According to Directorate General of Health Services (DGHS) sources, they are informed that Shakib had booked a room in a hotel as he intends to stay there after coming back from USA. Though, the claim was rejected by BCB officials.

“If he had booked a hotel, at least, we would have known that but that is not the case. As far as we know, he is staying at his residence,” said an official.

Whether Shakib will complete the 14-day quarantine will be clear in the upcoming days but his BKSP mentor Nazmul Abedin, who designed the practice programme for Shakib, said that he is expecting him to reach BKSP by September 6.

The all-rounder went to USA in March and he was blessed with his second daughter at the fag end of April while he spent most part of one-year ban with his family in USA.

Shakib returned home from abroad on many occasions but this time it was certainly different as he will start his preparation to stage his comeback to cricket. He was away from all kind of cricketing activities during his ban.

“Shakib will carry out his practice on his own. He has chosen BKSP (as practice facility),” said Nizamuddin.

A few days back, BCB President Nazmul Hassan Papon said that Shakib might return to cricket with the second Test of the Sri Lanka Series. BCB has furnished their plans to bring their ace all-rounder in Sri Lanka two weeks before the end of his ban. He will discretely practice there.

BCB Chief Selector Minhajul Abedin said that they are not aware of any directives regarding the inclusion of Shakib in the squad.

“We will start working with him formally from October 29 as we will follow the guideline of standard protocol after October 29 and not before that. We would urge everyone to be extra cautious regarding Shakib’s comeback so that ICC report regarding him remains good,” said Akram.

Though Akram insisted that ICC’s report regarding Shakib is ‘very good’, it is still not clear on what basis he mentioned it considering the all-rounder did not take part in any community awareness activities which is a must for cricketers getting banned from the crickets governing body.