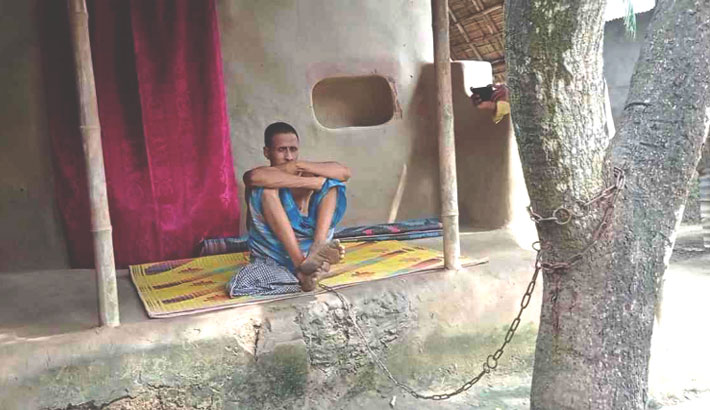 THAKURGAON: Muktarul Islam, said to be a mentally-retarded man, has been chained with a tree for the past 20 years by his family at Sallapara in Pirganj upazila of Thakurgaon district, reports UNB.

Muktarul has been shackled as they failed to arrange his medical treatment due to financial crisis, said his wife Nasera Begum.

Local people said Muktarul, aged about 50, has been suffering from mental disorder since his marriage.

Muktarul, a father of one child, used to lock into quarrels with others that forced his family to keep him in shackles, they said.

During a recent visit to Muktarul’s house, this correspondent found that his right leg was chained with a tree near his house.

Nasera said, “I’ve to work in others’ houses as a day-labourer to support my family and take care of my husband.”

She lamented for not being able to take her husband to a hospital for medical treatment due to the financial crisis.

Jalal Uddin, chairman of Boirchuna Union Parishad in Priganj upazila, said he is aware that Muktarul has been chained for 20 years due to his mental illness.

Locals hope Muktarul will recover fully once he gets treatment and financial assistance is needed to do so.