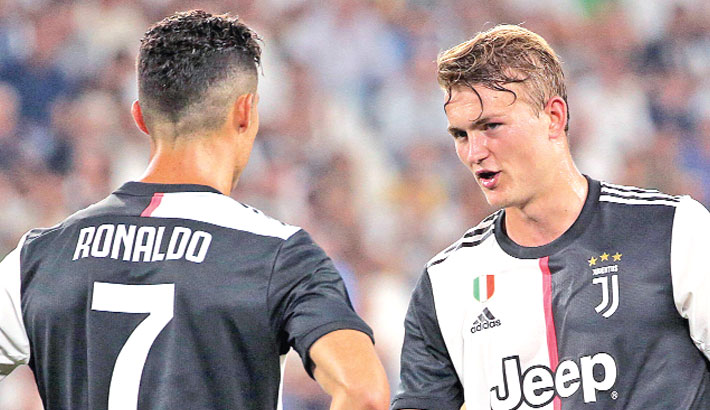 Matthijs de Ligt made sure Juventus kept hold of top spot in Serie A on Saturday after his first goal for the club saw off local rivals Torino, leaving Inter Milan in second despite Romelu Lukaku taking his league tally to nine with a brace in a 2-1 win at Bologna.

Inter had briefly led in Italy after Lukaku slotted home a 92nd-minute penalty to snatch the three points at Bologna, but Juve retook first place thanks to De Ligt, who smashed home the ony goal of the game in Turin with 20 minutes remaining.

Maurizio Sarri’s side stay a point ahead of Inter thanks to a hard-fought derby win that saw both sides exchange blows in a bruising contest.

“I am really happy, of course. It was a really important game, as Inter won also. We won 1-0 and it was my goal, so really special,” De Ligt told DAZN.

De Ligt has had a shaky start to life in Italy and could well have given away an early penalty when he touched the ball with his arm early in the first half, but was let off by referee Daniele Doveri and the VAR officials.

However the Netherlands international, who had already been denied by a superb Salvatore Sirigu stop just before the break, came up trumps in the 70th minute when he met substitute Gonzalo Higuain’s pull back just after the Argentine had forced a corner with a sizzling volley.

“Obviously, when you come to a new club, it’s always going to be hard. It’s going well, the guys made me feel welcome and I think I’m improving every game,” added De Ligt.