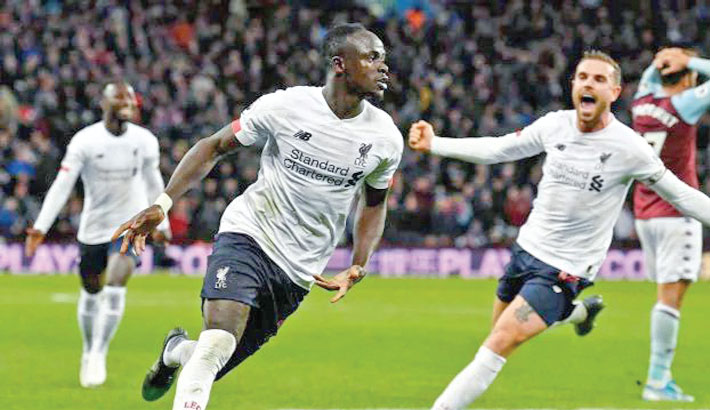 Liverpool staged a thrilling fightback to beat Aston Villa 2-1 thanks to Sadio Mane’s last-gasp winner, while Manchester City kept in touch with the Premier League leaders after their own escape act in a 2-1 victory against Southampton on Saturday.

Jurgen Klopp’s side trailed to Trezeguet’s first-half goal at Villa Park, but hit back to preserve their unbeaten league record this season in dramatic fashion.

The Reds, chasing their first English title since 1990, are six points ahead of second-placed City.

“It is the best possible feeling. It really is very satisfying, and the winner was from a corner kick routine that we have tried a few times,” Klopp said. “It was not because we have had a couple of comebacks in other games, you just have to keep on trying because we could have had another one today.”

But Sergio Aguero levelled for City with 20 minutes left and Kyle Walker snatched the winner in the 86th minute to keep Liverpool in their sights.

At Villa Park, the hosts took a shock lead in the 21st minute when Egypt midfielder Trezeguet met John McGinn’s free-kick and fired through the legs of Liverpool keeper Alisson.

Roberto Firmino thought he had equalised for Liverpool, but the Brazilian was flagged for offside from Mane’s cross. The goal was ruled out by VAR, with the Premier League offering a bizarre explanation that said Firmino’s “armpit” was offside.

Liverpool’s equaliser finally arrived in the 86th minute when Mane’s driven ball was met by Robertson and the full-back headed in at the far post.

Then in the fourth minute of stoppage-time, Mane glanced in from Trent Alexander-Arnold’s corner to complete Liverpool’s incredible revival.

Struggling Southampton took the lead in the 13th minute when City keeper Ederson spilled Stuart Armstrong’s shot and Ward-Prowse was on hand to slot home from close range.

With the momentum finally on their side, City won it in the 86th minute as Walker pounced after goalkeeper Alex McCarthy failed to deal with Angelino’s cross.