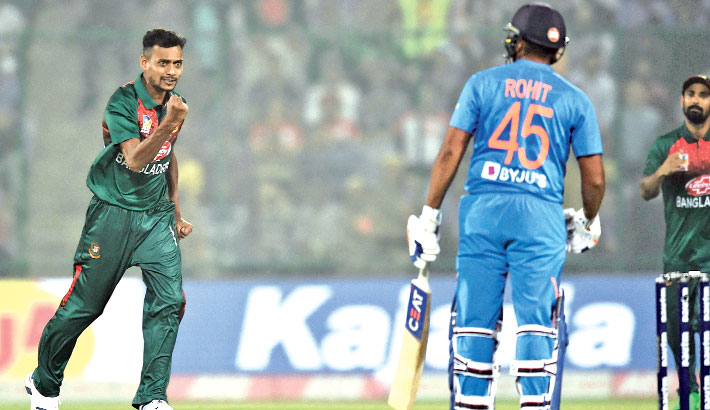 The three-match T20I series opener between Bangladesh and India got underway at Arun Jatley Stadium in Delhi despite all speculation on Sunday.

Post-Diwali, Delhi welcomed Bangladesh and India national cricket teams with the most unusual concerns namely burning eyes along with sore throats, heavy breathing as well as that all-pervading smog which seemed to be a permanent fixture in the Indian capital.

BCCI (Board of Control of Cricket in India) had previously made it clear that the match would go ahead as scheduled on November 3 at Delhi even though the air quality issue was brought up by both sports enthusiasts and environmentalists.

The game is indeed on despite the schools being shut, construction work stalled, and athletic activity advised against due to the air pollution. But the two teams didn’t complain officially and prepared themselves for the battle.

The game is India’s first international fixture after Diwali when the air pollution remains severe. When contacted Bangladesh officials said that they have no official complaint about the air quality.

“We have to consider that the situation is same for both teams as far as air-pollution goes and so we cannot make lodge official complaint in this regard,” said a top BCB official when his attention was drawn in this regard as he was travelling to Delhi for the series opener.

“Usually the home board takes such decision and this is entirely their jurisdiction and we must know that it is very difficult to shift venues overnight,” he said.

Since the evening there were rumors inside the Stadium premises that the game would be postponed due to insufficient light but that eventually did not happen to give the fans- who arrived at the venue despite facing all those difficulties while coming to the field- a chance to witness some cricket.

Delhi has been in the grip of a severe pollution crisis since last week, with the air quality index breaching the ‘severe’ mark of 400 to touch 484 this week.

Schools have been told to remain shut till November 5, and the government is distributing 50 lakh masks to students. While from Monday, the capital will roll out the odd-even road space rationing scheme to cut vehicular pollution.

Calls from Indian cricket fans to abandon the first T20I between India and Bangladesh grew louder after visuals from Arun Jaitley Stadium on Sunday showed the grounds enveloped in a thick layer of smog.

Air quality deteriorated further in the national capital region as pollution levels rose to ‘severe-plus emergency’ category. At 12:00pm, the air quality index (AQI) of Delhi was at 625, according to the data by System of Air Quality and Weather Forecasting And Research (SAFAR).

Hoping to settle some dust, the ground staff splashed water from tankers around the stadium on Sunday while the Delhi and District Cricket Association official said that the match referee will decide whether it should be cancelled or not, though it was later declared that the match will take place as per schedule.

The visibility in morning was very poor but conditions improved with each passing hours and it was better in the evening which prompted the match referee not to abandon the game.

Public attention shifted from air quality to cricket when both skippers went for the toss that was eventually won by visiting Bangladesh skipper Mahmudullah.

“Looks like a very hard Kotla (Arun Jaitley Stadium) wicket with no big cracks or dryness on the track and there’s a hint of green tinge too, hence the ball will come on to the bat nicely,” said Gavaskar.

“Don’t think the spinners will get much help from this wicket,” added Gavaskar.

“Chasing would be an ideal option with the dew factor coming in,” concluded Sunil.