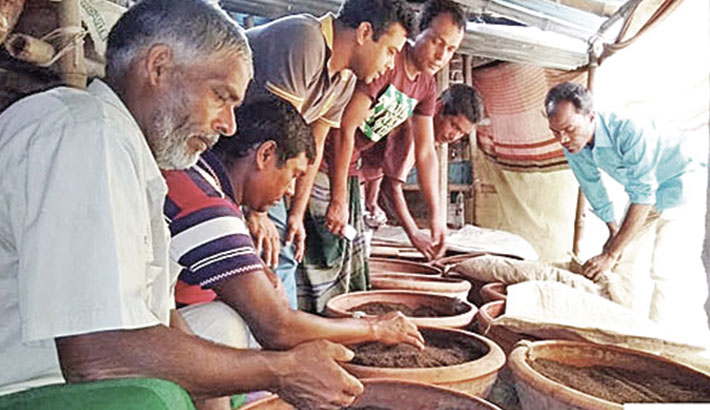 RAJSHAHI: Prospect of vermicomposting is very bright as many people have already attained tremendous success in the field of setting up vermicompost hatchery and farms in the region including its vast Barind tract for the last couple of years.

Jahangir Alam, 35, of Shinghamara village under Mohanpur upazila in the district has become almost self-reliant through manufacturing vermicompost.  With his wife Sahar Banu’s close collaboration, he established a household factory for manufacturing organic fertilizer, reports BSS.

Jahangir Alam couple is now ideal figure in their village as they spread the light of knowledge of becoming self-reliant by teaching the production methods of vermicompost fertilizer to put an end to their hardship.

They have a plan to give training free of cost to 10 women in each of the villages under their upazila and help them to set up firms for producing vermicompost fertilizer.

The couple urged the government to give them financial support to expand their firms as they have planned to produce 400 mounds vermicompost fertilizer per day.

The knowledge of vermin composting started brighter life for Shah Alam and his wife Momtaz of Mohishkundi village under the same upazila ending their dark times of misery, hunger and uncertainty. Alam couple started their venture investing Taka 55,000 only.

Now, four employees are working full time in their firms while there is also some temporary staff. Each of the permanent employees gets Taka 6,000 per month as salary.

Many farmers of the village including Ashraf Ali, Jabed Ali and Nazrul Islam were seen saying quality of locally manufactured vermicompost is better than many other organic fertilizers being sold in markets.

Raihan Kabir, another farmer of Kharibona village under Nachole upazila, has set instance of becoming self-reliant through vermicomposting farm in his dwelling house.

Raihan started his venture with 2,000 earthworms in five earthen pots in 2017. So far, he has sold 2,100 kilograms of vermicompost worth around Taka 27,300 to the local farmers. Other 600 kilograms remains stockpiled for selling. In last one year, he has enhanced the number of earthen pots to 63 from the initial stage of only five.

Muhammad Ali, a farmer of Gulalpara village under Durgapur upazila, said vermicompost is very much important for betel leaf farming besides making it disease-free.

He has been using the organic fertilizer instead of chemical fertilizer for the last five to six years. Many of his fellow-farmers are being interested to use the organic manure like him.

DAE has adopted special programmes of creating awareness among the farmers about vermicompost so that the lands get back productive capacity lost for excessive use of chemical fertilizer.