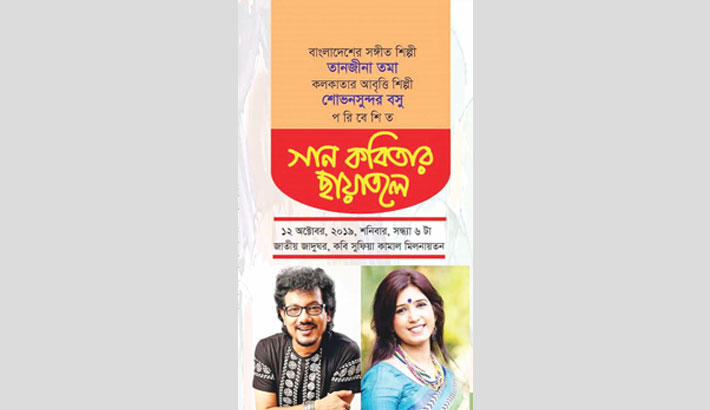 The programme is arranged by cultural organisation 'Amra Shurjomukhi'. Media personality Asaduzzaman Noor will grace the event as chief guest. Director of Indira Gandhi Cultural Centre, Neepa Choudhury will be present as a special guest.

About the show singer Tanjina said, “I will sing ten different Tagore songs in the show.

There will be recitation with the songs. I hope audience will like the duet performance of the artistes from both the Bengals.”

Artiste Shovansundar said, “I am privileged to come in Bangladesh. Tanjina is a talented artiste. Performing with her will be great pleasure to me.

I will recitation ten poems from ten poets. I expect, viewers will enjoy the show.”

Tanjina basically a Rabindra Sangeet singer and already made her mark in the industry.

She has always impressed the audience with her performances.

On the other hand, Shovansundar Bosu has created a new wave in Bengali performing art scenario by introducing on stage live instrumentation and rhythms in Bengali recitation or poetry performance.