Key issues for the Modi-Xi summit 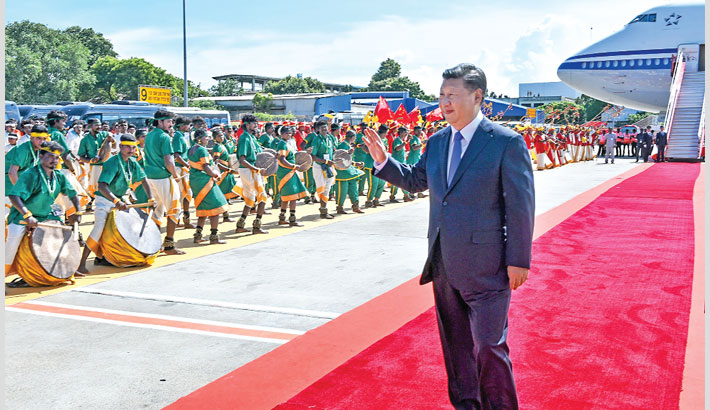 China’s President Xi Jinping waves to performers as he arrives in Chennai, to attend a summit with India’s Prime Minister Narendra Modi at the World Heritage Site of Mahabalipuram from October 11 to 12 in Tamil Nadu state. —AFP PHOTO

The leaders of the world’s two most populous nations will tackle “overarching issues”, according to India’s announcement of the meeting. Here are key topics that the uneasy neighbours will find difficult to solve:

India has repeatedly demanded greater access to China’s markets in recent years and pressure has grown because of the rising trade deficit of about $55 billion in Beijing’s favour.

India’s pharmaceutical and software industries have in particular lobbied for a more open border. India wants trade dealt directly with China, but their talks will have an impact on the free-trade accord that Southeast Asia’s ASEAN is negotiating with major partners including Beijing and New Delhi.

India is one of the key countries where Chinese telecoms giant Huawei wants to establish its next-generation 5G technology.

Xi is expected to press Modi to give Huawei the green light to take part in 5G trials, in the face of US opposition due to security concerns over Chinese-made equipment.

Huawei is already a major player in India’s smartphone market but the government has yet to make clear its stance on the company’s role in Indian 5G networks.

India-China tensions rose again after New Delhi’s move on August 5 to revoke the autonomy of Jammu and Kashmir, a Muslim-majority Himalayan region also claimed by Pakistan.

China controls a part of Kashmir, which is in turn claimed by India. China’s criticism of India’s constitutional move angered the Modi government. The rivals have a long-pending border dispute in Ladakh—a strategic Buddhist-dominated region within Kashmir that is to be split into a separate Indian administrative territory under the changes.

Besides Ladakh, India and China also have a decades-old dispute over Arunachal Pradesh, an Indian state bordering Tibet.

They went to war over the territory in 1962 and China still claims about 90,000 square kilometres (35,000 square miles) of land under New Delhi’s control.

The Buddhist and Hindu dominated region with dense forests and waterfalls is also home to many indigenous tribal communities.

The two Asian giants are also competing for influence across South Asia.

Xi is due in Nepal on Sunday after these talks and their strategic rivalry can also be seen in projects and diplomatic pushes in Sri Lanka, Afghanistan, Myanmar and even the Maldives.

The two leaders discussed greater regional cooperation at their last summit but experts say little has changed since.