Tigers staring at the eyes of defeat 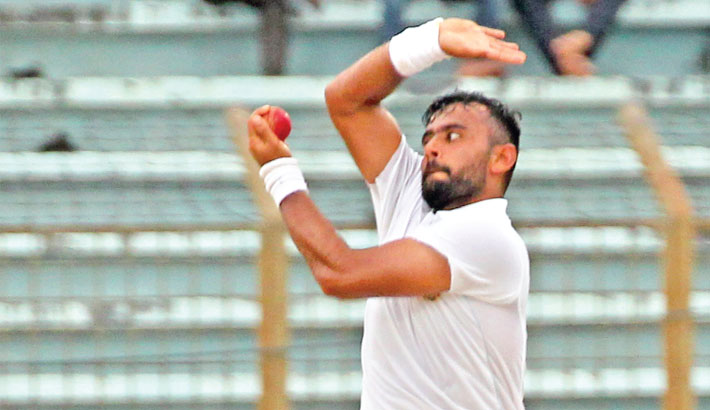 Afghanistan captain Rashid Khan bowls during the fourth day of their one-off Test against Bangladesh at Zahur Ahmed Chowdhury Stadium in Chattogram on Sunday. - Rabin Chowdhury

An out-of-sorts and jaded Bangladesh stood on the brink of a shambolic defeat to Afghanistan after being reduced to 136 runs for 6 wickets in their chase of an improbable 398-run target on the rain-marred day four of the one-off Test at Zahur Ahmed Chowdhury Stadium in Chattogram on Sunday.

Afghan skipper Rashid Khan led the way with 3 wickets for 46 runs, triggering a collapse in Bangladesh batting order on day four, which came to an end after rain halted the game for the fifth time.

Skipper Shakib Al Hasan was batting on 39 runs with Soumya Sarkar, who is yet to score.

Rashid who took 5 wickets for 55 runs in the first innings, tormented Bangladesh batsmen with his trademark googly and generating pace that took his wicket tally to eight in the match.

Two more wickets in the match will make him only the third captain after Pakistan’s Imran Khan and Australia’s Alan Border to have taken 10 wickets and scored a fifty on captaincy debut.

After a delayed start to the fourth day due to sporadic rain, Afghanistan, resuming with 237 runs for 8 wickets, were bowled out for 260 runs in its second innings, extending their lead to 397 runs.

Bangladesh’s highest successful run-chase in the fourth innings is 217 runs, when they were set 215-run target by West Indies at St Georges in 2009.

The hosts made some changes to the batting order with Liton Das coming in to open with Shadman Islam.

They made a steady start in their chase of 398 runs but a wicket looked on the cards, considering the way the Afghan spinner were hitting the right line and length consistently.

Debutant left-arm chinaman Zahir Khan, finishing with 2 wickets for 36 runs, started the rot after Liton and Shadman showed a good intention to weather the spin attack.

But Liton (9) was beaten by Zahir Khan’s extra pace, much to the frustration of the sparse crowd in the stadium.

Mosaddek Hossain who was promoted to No 3, replacing Mominul Haque, played an expensive cut shot against a turning delivery of Zahir for 12 runs.

Rashid Khan then took the prized scalp of Mushfiqur Rahim for 25 runs, baffling him with a googly.

The 20-year old Afghan captain later spun sharply one past Mominul Haque to dismiss him for 3 runs, leaving Bangladesh reeling at 82 runs for 4 wickets.

Amid the wickets tumbling around him, opener Shadman Islam showed good temperament and composure, required to thrive in Test cricket.

But Mohammad Nabi, who is playing his last Test, had him lbw, bringing an end to his 114-ball stay bringing in 41 runs, adorned with 4 fours.

Skipper Shakib Al Hasan was fluent in his approach and punished the bad balls in disdain.

He was also the one to deal with Rashid’s deadly googlies with much success but that was not the case for his partner Mahmudullah.

Rashid gave the taste of his traditional leg-breaks before unleashing a googly to get the better of him on 7 runs.

Just when it felt that Afghans would wrap up a famous victory with a day to go, the rain again came to bring an end to the eventful day and delayed the inevitable.