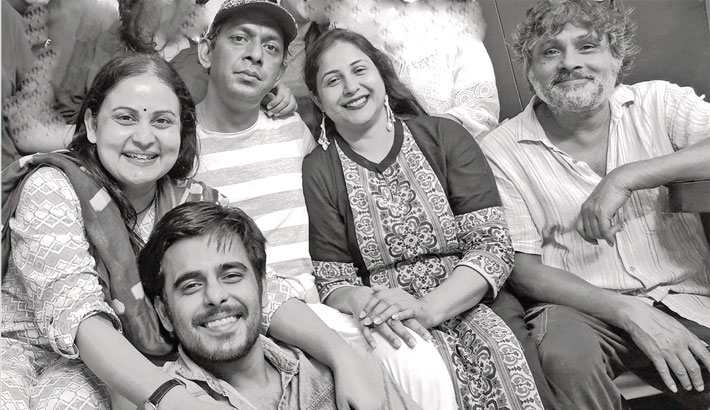 The shooting of the much-talk film began in Chandpur on September 2. It is Giasuddin selim’s third film.

Through this film Afsana Mimi has returned to a film after ten years long hiatus.

Chanchal Chowdhury won the heart of millions with his brilliant portrayal of Shonai in Giasuddin Selim’s directorial debut Monpura in 2009. Following the success of Monpura, Chanchal did not need to look back.

Again Chanchal Chowdhury is working under the direction of Selim.

On the other hand, Farzan Chumki has been involved in the media industry for two decades. She has been a part of numerous television projects, but never appeared in movie. ‘Paap Punno’ is Chumki’s debut movie and she will portray Rabeya’s character as Chanchal’s wife in the movie.

While, popular actor of the new generation, Siam Ahmed, is working under the direction of Giasuddin Selim for the first time through Paap Punno.

Chanchal Chowdhury and Siam Ahmed are in the lead roles.

Besides this four artiste, Fazlur Rahman Babu, Mamunur Rashid, Gausul Alam Shaon are among other casts.

The director did not disclose much about Paap Punno. But, Selim has made the film base on a basic story.