Patriotic generation a must for developed nation: Hasan 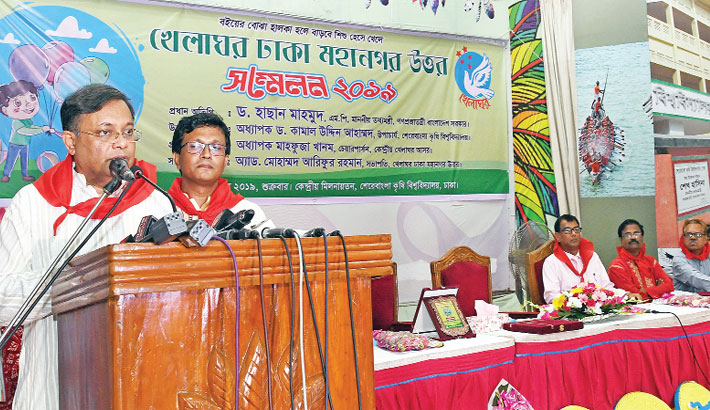 Information Minister Dr Hasan Mahmud on Friday praised the role of country’s leading children and juvenile organization ‘Khelaghar’ in creating patriotic generation saying posterities must be patriotic, meritorious and loving to others to build a developed nation, reports BSS.

“The new generation must be brought up with the spirit of patriotism, educated with modern knowledge to make Bangladesh a developed nation by 2041,” he said adding that in near future the world would be amazed seeing the tremendous progress of Bangladesh.

The minister said this while addressing the conference of the Khelaghor, Dhaka City North unit, as the chief guest at Sher-e-Bangla Agriculture University conference hall.

Vice Chancellor of the university Professor Dr Kamal Uddin Ahmed inaugurated the conference while president of the unit Arifur Rahman was in the chair.

Khelaghar for the last 67 years has been working devotedly to infuse progressive thinking in children, the minister said. Dr Hasan said Bangladesh, under the dynamic leadership of Prime Minister Sheikh Hasina, is moving fast keeping pace with the developed world to become a developed nation.

“The world will be astonished in the coming days seeing the tremendous progress of Bangladesh and for this we need a new patriotic and meritorious generation,” the minister said.

The information minister acknowledged that Khelaghor has been playing a vital role in building the children and juveniles as worthy citizens and secular for 67 years.