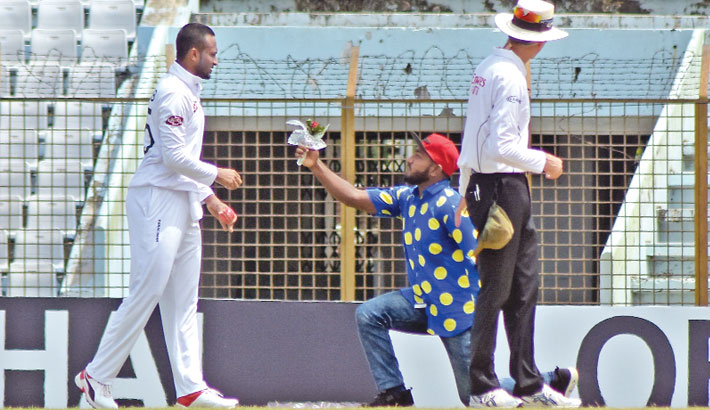 A fan enters into the ground and offers flower to Bangladesh skipper Shakib Al Hasan on the second day in the middle of their solitary Test against Afghanistan at the Zahur Ahmed Chowdhury Stadium in Chattagram on Friday. — Rabin Chowdhury

A young cricket ran onto the Zahur Ahmed Chowdhury (ZACS) Stadium to show his love towards his favourite player Shakib Al Hasan during the day two of the one-off Test between Bangladesh and Afghanistan on Friday.

The incident took place after the 107th over of Afghanistan innings when the fan, named Faisal Ahmed, jumped over the fence from the Eastern gallery, escaped security and went straight to Shakib, who looked shocked and ran behind umpire Nigel Llong.

Shakib only decided to come forward after understanding the whole situation.

Eye witness Shafiul Islam said that he saw the fan Faisal Ahmed jumping from the gallery coming from the number two gate.

The fan gave Shakib a salute before going down to his knee to offer a rose.

The security personnel then kept his away from the ground. Invading pitch during the International game is nothing new in the World but this is considered as a crime.

“We are talking with the police authority and taking care of the situation,” said BCB security head Hossain Imam. “It seemed he was a crazy supporter,” he added.

While taking by the police the man in question said that he is apologetic for the entire incident.

The same thing happened with Mashrafe Mortaza in an ODI in 2016 when a pitch intruder named Mehedi Hasan entered the field unexpectedly to hug the ODI skipper.

Mehedi was taken to the custody but Mashrafe defended his fan later.