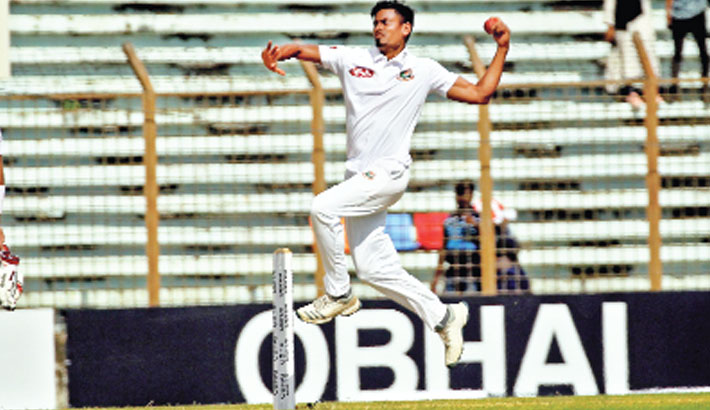 Bangladesh spinner Taijul Islam bowls against Afghanistan during the first day of the match on Thursday. — Rabin Chowdhury

Bangladesh left-arm spinner Taijul Islam became country’s fastest cricketer to reach 100 wickets in Test cricket when he grabbed the much-needed wicket against newcomers Afghanistan on the first day of their one-off Test series at the Zahur Ahmed Chowdhury Stadium (ZACS) in Chattagram on Thursday. Taijul, a tacit figure in the dressing room, maintained a strong presence in Test cricket made his Test debut exactly five years ago against West Indies at Kingstown in Saint Vincent in 2014, has been the leading Bangladeshi wicket-taker in the longer-format since his debut.

Bangladesh enjoyed much of their success in their Test cricket history in last five years, a period when they recorded nine of their 13 Tests wins.Bangladesh’s success during this period includes Test win against the likes of Australia, England when Sakib starred as an all-rounder.The 27-year left-arm spinner reached the milestone when he clean bowled Afghan opener Ihsanullah with a ripper (fantastic delivery) that pitched on leg-and-middle and beat the outside edge of Ihsanullah to cannon into the sticks. Taijul came into bowling as Shakib’s new-ball partner just after the opening over bowled by the captain himself but he (Taijul) succeeded his efforts in the second ball of the seventh over. By his benchmark wicket, he eclipsed Shakib Al Hasan’s fastest Bangladesh record after seven years to keep his record under his possession.The 27-year-old spinner matched the record of Mohammad Rafique with the landmark scalp though he superseded Rafique’s Test wicket tally later on with the wicket of another opener Ibrahim Zadran, who looked to go over the bowler’s head but the ball just spinned away at the batsman, inducing a false shot and Mahmudullah Riyad completed the catch at long-on peddling back towards his left.

Taijul set the new record on his 25th Test, three Tests less than Shakib and eight Tests than Rafique. Shakib slammed the feat by playing 28 Tests, while Rafique did it on his 33rd Test. Taijul however said that he focused on just getting as many wickets as it is possible, not the record. “I am really happy to achieve this feat,” Taijul told reporters at the post-match press conference at ZACS on Thursday.

“Test cricket is respected everywhere and it a reason I am cherishing the feat more,” he said. “When I get into the field, I try to bag five wickets or six wickets. I don’t play for one wicket. I always think to help the Bangladesh team,” he said.

Although most of Taijul’s wickets came in the home condition, 81 wickets exactly in number, his prolific performances could not be more impressive and Bangladesh’s interim spin-bowling coach Sohel Islam was quick to admit it adding that his focus remains a critical part of his preparation.

I think he takes good preparation. He prepares himself well before any of the matches. He remained focused on his game and he makes his preparation by knowing his works. I think these things help him a lot to reach this position,” Sohel told daily sun.

“We have been working together for a few days and the milestone was not in our heads. We have not discussed the issue and were not thinking anything about it. We are just focusing on our match,” he said.

“He is in a good rhythm and we want to continue the process in the right way. The record is not giving us too much headache,” he added.