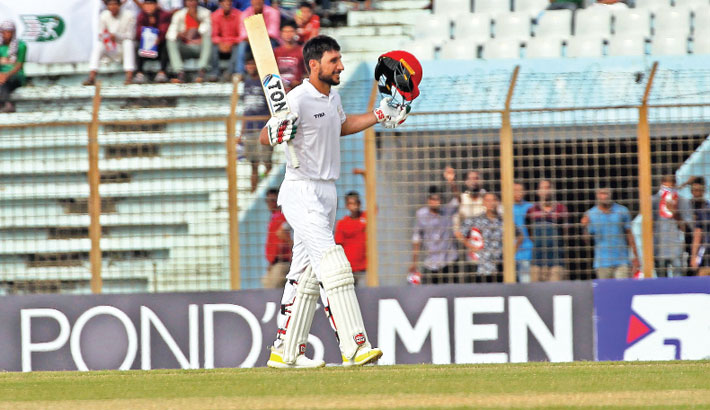 Afghanistan batsman Rahmat Shah celebrates making 100 runs on the first day of their one-off Test against Bangladesh at the Zahur Ahmed Chowdhury Stadium in Chattagram on Thursday. — Rabin Chowdhury

Bangladesh’s all spin tactic didn’t provide the expected result as Rahmat Shah proved him as a barrier and thereby became the first batsman to hit a century for his nation to lift Afghanistan to a strong position on the opening day of the one-off Test on Thursday at the Zahur Ahmed Chowdhury Stadium in Chattagram.

At the close of the day that was extended for 20 minutes after a spell of the shower, Afghanistan reached 271-5 with Rahmat Shah leading the way with chanceless 102 from 187 balls.

Asghar Afghan was batting on 88 with Afsar Zazai on 35, sharing a record 74 runs in an unbroken sixth-wicket stand that was a tough pill to swallow for Bangladesh who got the wicket to their bowling strength.

Asghar Afghan and Rahmat Shah however earlier combined for a national record of 120-run for the fourth wicket to put Afghanistan in a strong position after Bangladesh reduced the visitors to 77-3 at lunch.

Both sides were jam-packed with spinners as they fielded four-pronged spin attack with anticipation that spinners would have outright control in the game.

Afghanistan though took one pace in the side, Bangladesh even opted out this option.

That spinner will be going to rule the Test was evidenced in how Taijul got the turn and bounce right from the beginning.

He flummoxed Ihsanullah (4) with a googly for his 100th wickets in 25 matches, making him the fastest Bangladeshi to reach the feat.

Taijul then again broke through with the wicket of another opener Zadran (21) before Mahmudullah Riyad struck in his first over to remove Hasmatullah Shahidi (14), keeping Bangladesh in control at the first interval of the day.

Asghar Afghan joined Shah to frustrate Bangladesh in the whole second session; keeping Bangladesh wicket-less and put up runs at a good pace in a pitch that offered turn and bounce aplenty.

But their careful approach, combined with Bangladeshi bowlers’ inability to land the ball in the right areas after the first session, kept Afghanistan unscathed.

Rahmat Shah who fell short of two runs to hit a century against Ireland in Afghanistan’s previous test, this time didn’t miss the chance to inscribe his name in the history.He reached the landmark off 186 balls with a late-cut off the back foot wide of backward point for a boundary from off-spinner Nayeem Hasan’s delivery.

His maiden century and third fifty-plus knock in just five innings was laced with 10 boundaries and two sixes.But he was dismissed in the next delivery off Nayeem, offering a simple catch at the slip. In the same over, Nayeem removed Mohammad Nabi with naught to bring Bangladesh back in contention with Afghanistan at 197-5.But Asghar Afghan, with the apt support from Afsar Zazai, consolidated Afghan’s domination. For Bangladesh, Taijul Islam and Nayeem Hasan claimed two wickets apiece.