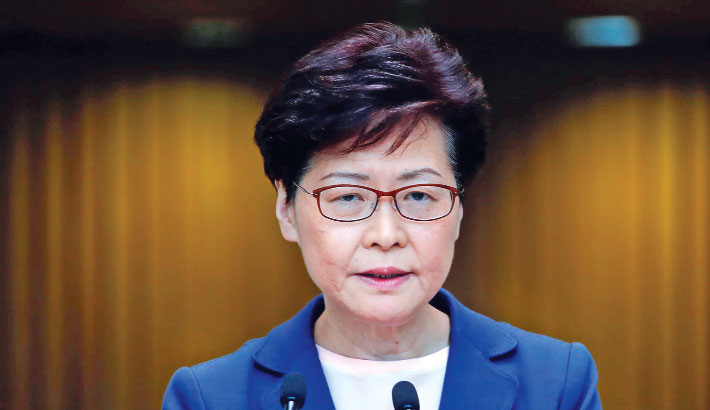 HONG KONG: Hong Kong’s leader on Thursday urged pro-democracy protesters to end their demonstrations after her surprise decision to bow to one of their key demands was condemned as too little, too late, reports AFP.

Carrie Lam, the city’s pro-Beijing chief executive, surprised many on Wednesday when after three months of rallies she suddenly announced she was scrapping a hugely unpopular proposed extradition law.

Millions of people have taken to Hong Kong’s streets since June in the biggest challenge to China’s rule of semi-autonomous Hong Kong since its handover from the British in 1997.

The protests were sparked by a bill allowing extraditions to the authoritarian mainland but as Beijing and Lam refused to budge, the movement morphed into a broader campaign calling for democratic reforms and police accountability.

On Wednesday evening, Lam released a video message saying she was scrapping the bill entirely, a key demand of protesters. At a press conference on Thursday, Lam continued her newfound conciliatory tone, saying her decision to fully withdraw the bill was an attempt “to help prevent violence and stop chaos as soon as possible, resume the social order and help our economy and people’s livelihood to move forward”.

“It is obvious to many of us that the discontentment in society extends far beyond the bill,” Lam added, saying she recognised that anger over inequality and the government had spiralled and needed to be solved.

She renewed her appeal for protesters to enter into a dialogue with her administration and called on moderate protesters to abandon their more militant allies who have frequently clashed with riot police over the last 14 weeks.

But there is little sign her belated concession will end protests or heal divisions in the international financial hub.- ‘Concrete institutional reform’ -

Hong Kong’s protests are leaderless and organised through social media, encompassing a vast swathe of the city, from moderates to more radical groups.

Since Lam’s announcement on Wednesday, there has been uniform condemnation across the protest spectrum with activists vowing to keep up their campaign.

At a “citizens press conference” Wednesday evening — a useful gauge of the youth-led wing on the frontlines at rallies — an unidentified woman wearing a mask and helmet rejected the concession.

“If Carrie Lam had withdrawn the bill two months ago, that may have been a quick fix,” she said. “But applying a band-aid months later on to rotting flesh will simply not cut it.”

Online forums used by protesters have filled with calls for new rallies — including plans on Saturday to disrupt transport links to the city’s airport, a major regional aviation hub.

More moderate pan-democrat lawmakers have also rejected the concession and even some pro-establishment figures within Lam’s camp have said the bill withdrawal will not do enough to curb public anger.

Beyond calls to scrap the extradition bill, protesters had four core demands: an inquiry into police conduct, an amnesty for anyone arrested, a retraction of the label “rioters” to describe protesters and universal suffrage — the last a major red line for Beijing.

So far Lam has consistently rejected those four demands, even though many say backing an independent inquiry could peel some moderate protesters away from the movement.