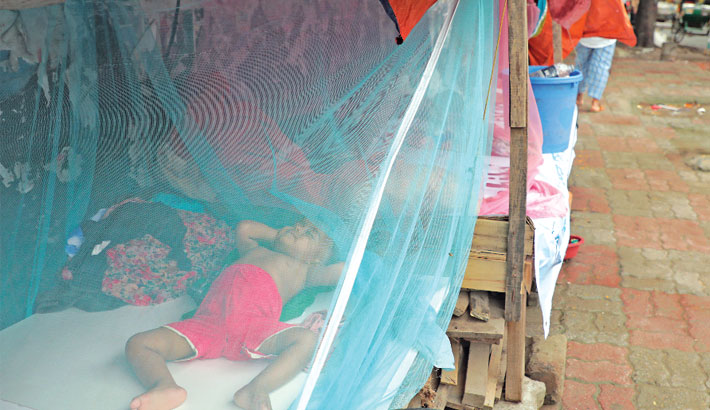 A family living on the footpath in the capital’s Karwan Bazar area uses a mosquito net in the daytime to save their baby from the Aedes mosquito, which transmits dengue virus. The photo was taken on Thursday. —Reaz Ahmed Sumon

Although dengue cases are declining gradually, health experts suggested that people should remain alert to a further rise of the mosquito-borne disease in the country.

According to the data of the Directorate General of Health Services (DGHS), some 74,353 dengue patients were hospitalised since January.

It said a total of 70,790 dengue patients were discharged from hospitals after their recovery.

Official estimates say that 95 percent of dengue patients left hospitals after taking treatment while the number of new cases has been decreasing in the last few days.

The IEDCR received reports of 192 suspected deaths caused by dengue across the country but 57 deaths have been confirmed so far after reviewing 96 cases.

However, unofficial figures suggest a much higher death toll from dengue infection.  Around 80,000 people were hospitalised so far. Of them, around 170 died since January.

The health directorate said a total of 42,514 patients were admitted to 41 private and public hospitals in Dhaka city till Thursday this year.

Some 31,839 dengue patients were admitted to hospitals in districts across the country outside Dhaka city during the same time.

Health Emergency Operations Centre and Control Room of the DGHS said some 788 new patients were hospitalised across the country in the last 24 hours from 8:00am on Wednesday till 8am on Thursday.

Of them, 331 patients were hospitalised in Dhaka while 457 outside the capital.

However, there is no record of how many patients are being treated at private chambers. Almost all government and semi-government hospitals are providing outdoor treatment to dengue patients.DGHS data on Thursday morning also shows that some 3,371 people were currently being treated for dengue. Of them, 1,729 are taking treatment in 41 private and public hospitals of Dhaka.