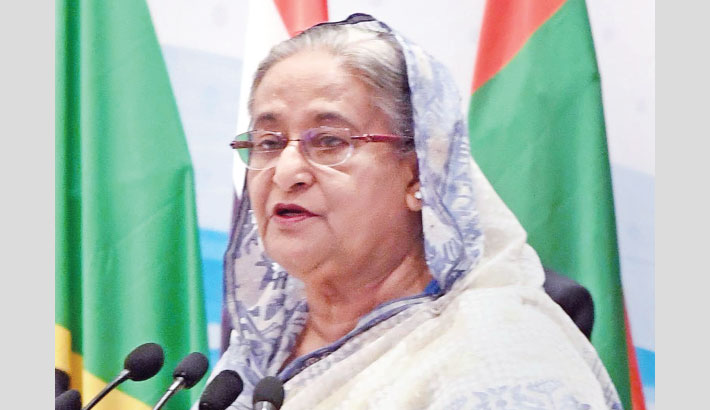 Prime Minister Sheikh Hasina on Thursday called upon the Indian Ocean Rim Association (IORA) member states to build a unified sustainable blue economic belt in this region by making best use of the untapped resources of the sea, reports BSS.

“There are great opportunities to accelerate the sustainable development process of the respective countries of the region through Blue Economy approach making best use of the unused or untapped resources of the sea,” she said.

The Ministry of Foreign Affairs in association with IORA has organised the two-day conference.

The prime minister also urged the IORA member countries to build on a consensus agreement to achieve the Goal-14 of the SDGs of the UN through a sustainable approach of management of the sea resources in this conference.

She said in pursuit of making the best outcome of a unified sustainable Blue Economy, there is no alternative to cooperation and coordination among the stakeholders.

“Therefore, I would urge you all to build on a consensus agreement to achieve the Goal-14 of the SDGs of the UN through a sustainable approach of management of the sea resources in this conference,” she said.

Only then, she added, the Blue Economy would play pivotal role to contribute to the life of 9 billion people by 2050.

Pointing out that there is an intricate relation between peace, security and sustainable development, Sheikh Hasina said: “We have to keep it in mind that we cannot sacrifice the marine environment in pursuing economic growth.”

The premier went on saying: “We should simultaneously look Blue Economic Growth and think blue.”

She said a properly coordinated, profitable and overall a protective policy to the sea/ocean has to be adopted and to act accordingly to achieve the goal.

Sheikh Hasina said the oceans and seas are the potential and versatile resource frontiers for the mankind, which are still remained under-explored mostly.

“Ocean-based industries such as shipping, fisheries, energy and minerals, seaports, tourism and marine biotechnology are contributing as key driving forces to the flourishing global economy,” she added.

Realising the importance of the sea and its potential maritime resources, the prime minister said Father of the Nation Bangabandhu Sheikh Mujibur Rahman first adopted ‘The Territorial Waters and Maritime Zones Act, 1974’, to set the limit of the ‘Maritime Zones’ of Bangladesh and extract sea resources.

She mentioned that her government formulated short, medium and long term “Plan of Actions” with a view to conserving, controlled harnessing, managing and development of fishes in the Bay of Bengal.

About the IORA, Sheikh Hasina said the association has become a platform for cooperation in the areas of maritime safety and security, trade and investment facilitation, fisheries management, disaster risk management, science and technology cooperation, tourism and cultural exchanges and blue economy.

She hoped that this spirit of cooperation and momentum of collaboration among the IORA members will be augmented in the days to come.

In this connection, the premier said Bangladesh is going to take charges as the Vice-Chair on the 1st of next month for two years and the Chair on 1st October in 2021 for next two years of the IORA.

She requested the member countries of the IORA for extending all-out cooperation in discharging these challenging duties.

“We will work together for ensuing development and proliferation of the Blue Economy in many dimensions,” she said.

Sheikh Hasina welcomed the ministers, delegates and the representatives of the IORA countries to the 3rd Blue Economy Ministerial Conference.

“I hope that your decisions to be taken in unison and in friendly atmosphere that will help build a unified sustainable blue economic belt in this region,” she said.

The premier said it is a bitter truth that oceans are now under ominous threat owing to the human-induced causes like over extraction/exploitation of resources, environmental pollution, oil spill, littering of plastic wastes, underwater noise pollution and above all the climate change.

All these activities, she said, are resulting in further heating of seawater and thereby imposing threats to the marine biodiversity.

The prime minister said not only that, most of the IORA member states are highly vulnerable to Tsunami and cyclones and global warming as climate change is threatening the ecology, including the plants and animals life.

Sheikh Hasina said oceans and seas absorb almost 30% of all greenhouse gases as well as 90% of the excess heat caused by global warming and the existence of human race will be in peril if the marine ecological system disrupts.

“We need to respond very quickly to tackle these challenges. We need to be concerned about the all kinds of illegal activities in the ocean. We have to realize that every investment we make and every step we take to protect our oceans and marine resources is well-worth in the long-term regional benefits,” she said.

In this connection, the premier mentioned that for conservation of the marine lives, Bangladesh has completely banned fishing by destructive methods and means.

Bangladesh has declared its ‘Zero Tolerance’ for curbing and countering terrorism, she said adding that the country also has adopted acts, rules and laws to stop criminal activities within its sovereign territory.

“I hope, all the relevant issues required to support our cause and move forward to pursue our shared goal and universal welfare will be discussed at the Ministerial Conference,” she said.

Ministers, deputy ministers and high government officials and experts, including secretaries of 22 member states and 9 dialogue partner countries of the IORA are participating in the conference that began yesterday.

The conference will adopt the Dhaka Declaration and other outcome documents aimed to illustrate the commitment of IORA Member States to further strengthen and deepen cooperation on Blue Economy priority areas in the years to come.

Japan, Germany, China, the UK, the US, France, and Egypt are the dialogue partners of IORA.