JP close to a split amid high drama 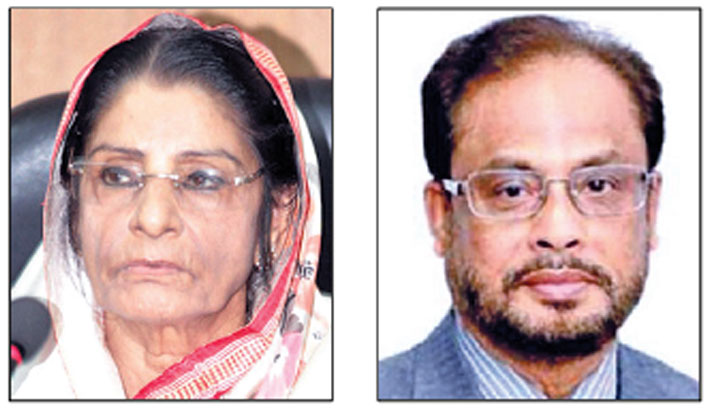 The opposition Jatiya Party (JP) was very close to a split again Thursday after several weeks of high drama involving the widow and brother of the party’s founder, late president Hussain Muhammad Ershad.

The party’s near split situation arose over its leadership and the coveted chair of the leader of the opposition in the 350-member national parliament.

On Thursday, faction backing Raushan Ershad, the senior co-chairman and Ershad’s widow, as JP’s new chairman and asked the sitting chairman and the former president’s younger brother, GM Quader, to take charge  as the co-chairman.

On the other hand in a separate press conference, GM Quader remained adamant saying he was the chairman as per the party’s charter.

One of the backers of Raushan Ershad told journalists at her  Gulshan residence that a new chairman would be elected after council election.

JP presidium member Anisul Islam Mahmud announced that “Raushan Ershad will perform the responsibility of the party  from today (September 5) and we will elect a new chairman by holding council meet within six months.”

He said “Raushon Ershad will grant GM Quader the honour of being co-chairman. On behalf of Raushan Ershad, I request GM Quader to accept the gesture as president Ershad had installed him in the post … we will take all initiative to do party’s politics together.”

Asked about nominating candidate for Rangpur 3 by-election, he said the parliamentary board which has been formed by GM Quader to select the candidate, is ‘false’.

Speaking at the press conference, Raushan Ershad, also current deputy leader of the opposition in parliament, prayed for the peace of the departed soul of her husband.

Raushan Ershad said party leaders were worried about the happenings over the past weeks in the party. “They also fear whether the party is going to face a split as in the past. But I want to run the party together with all.”

She also urged those who left the party at different times to rejoin Jatiya Party which was founded by her late husband Ershad.

Following the announcement, GM Quader also held a press briefing at the party’s Banani office and said action would be taken against those who declared Raushan Ershad as the party chairman.

He said in the briefing that according to the party charter, he was still the chairman of Jatiya Party. And those who declared Raushan Ershad as the chair broke the discipline of the party and action would be taken against them in this regard, he added.

Quader also claimed that he has sent letter to the Speaker seeking his appointment as opposition leader as per the decision of the parliamentary party as 15 lawmakers out of total 25 have signed in the letter.

However, Jatiya Party secretary general Moshiur Rahman Ranga and several other central leaders of the party were not present at both the press conferences.

Jatiya Party’s difference of opinions came to the spotlight once again as Jatiya Party Senior Co-Chairman Raushan Ershad on September 4 wrote to the Speaker not to accept the letter of GM Quader sent to her on September 3 for officially recognising him as the Leader of the Opposition in Parliament.

In the letter sent to Speaker Shirin Sharmin Chaudhury, Raushon said GM Quader sent the letter without any decision at the party forum and meeting of the Jatiya Party Parliamentary Party.

Before sending the letter, some Jatiya Party leaders, including Anisul Islam Mahmud, Mujibul Haque Chunnu and Fakhrul Imam, had a long meeting with Raushan at her Gulshan residence.

Jatiya Party joined the 11th general election as the key partner of the Grand Alliance and bagged 22 seats. After the election, the party decided to play the role of opposition in parliament. Two more are from the reserved seats for women.

Before his death, Ranga said, Ershad through an organisational instruction had announced that GM Quader would be the party chairman in his absence.

Four days later, Raushon in a statement on July 23, said GM Quader cannot be declared the chairman of the party without any decision at the party forum.

The faction, led by Raushan Ershad, sent a letter to the Election Commission on Thursday afternoon, mentioning her as the Jatiya Party chairman.

In the letter, Raushan has urged the EC not to accept signature of any other leader, party sources said.

Earlier, the GM Quader-led faction sent a letter to the EC, mentioning that he is the chairman of the party, they added.

Meanwhile, the Raushan-led faction has formed a 13-member parliamentary board to nominate a candidate for a by-election to Rangpur-3 constituency.

The faction has convened a party meeting for September 8, a JP leader said.

The faction, led by Kazi Zafar Ahmed, split from Jatiya Party in November 2013 over the 2014 general election.

Besides, there are two more factions of Jatiya Party – one by Anwar Hossain Monju and another by Najiur Rahman Manju.