We are ready, says Moles 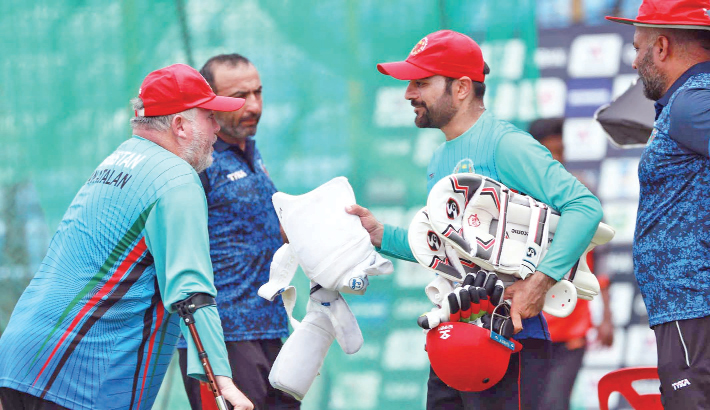 Afghanistan interim head coach Andy Moles said on Tuesday that they are ready for the upcoming one-off Test series against Bangladesh as they have done their home work against the hosts and prepared accordingly.

Afghanistan gave a hint of their preparation in the practice game where they showcased their talent in both departments in the drawn two-day match at the at the MA Aziz Stadium in Chattagram.

“I don’t have any concerns. We have been now together for two weeks in Abu Dhabi and then here. We worked on all aspects. And last few weeks we work on our skills against spin. We are confident in our preparation. And now it’s just to put a challenge on the players and what they are looking forward is to unveil their skills in the Test match,” said Moles.

“The coaching staffs are delighted with effort from the players. This is a really hard challenge to play against the hosts in Bangladesh. If we look at the past series, top teams in the world had to put a lot of hard work. We are under no illusion that this is going to be our tough examination of our skills. But we have worked hard. Delighted with the attitude the players put into this game. Now, let’s see how they play and hope for a good result,” he added.

Moles said if they lose it will be a learning curve for them.

“We need to be more consistent, we have played two test matches, and it is the third test match. We need to bat for longer; we need to bowl better when we come to bowl in the second or first spells. We need to make sure at the field that our concentration level is higher, you know in this form of the game there is very much hard, but there is no excuse from me,” he said.

“Certainly, if we don’t play well then it could be a learning curve and we must get better in all aspect and we need to play more test match cricket. We are respecting Bangladesh team as they play wonderful cricket at home from a long time and we are coming here as very much underdogs. We are looking forward to taking the challenge. We are under no illusion that’s it gonna be easy. If we can show up in the occasion and concentrate and do the right thing and right time then we will be capable to do something special,” he said adding that he is aware that hosts will come up with a spin attack.

“I’m not here to talk about Bangladesh. I’m here to talk about what we can control. We can control how they bat, bowl and field. I can get my players under the captaincy of Rashid to apply them in a manner which gets the best out of them. Being consistent is our challenge. We have got skillful players as well,” said Moles.

“I’m not surprised. I have seen the results of yours in the last few games. It’s a home advantage. I would be surprised if they did not come with spin. We also have a good spin attack,” he said adding that if they manage to win it will be massive for the Afghanistan cricket.

“It (if we win) will be massive. We can play well because the guys have put that effort. We are not scared of Bangladesh, but we respect them. We know how we have to play. Hopefully, the players apply themselves according to the plans in the dressing room and team meetings,” he concluded.