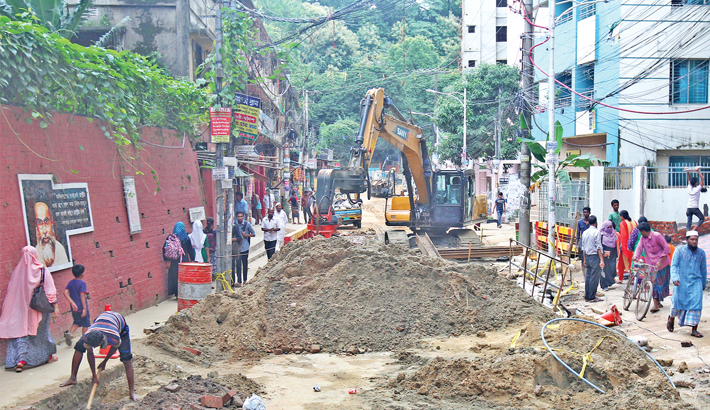 Traffic movement through the Jamal Khan to Gani Bakery intersection remained suspended due to project works by CWASA. The suspension causes immense sufferings to the road users. – RABIN CHOWDHURY

Dilapidated condition of many of the city roads has been causing immense sufferings to the city residence over the last couple of years.

In this circumstance, many roads were dilapidated and unfit for traffic movement.

However, the city dwellers will not get rid of the hassles very soon as Cwasa will continue the works till 2021.

Sources said though the Cwasa started digging the roads around six years ago for implementing some projects, the crisis turned worst now.

On the other hand, according to sources in the CCC, some 200 kilometre city roads were damaged in the rainfall, high-tide and waterlogging during the last rainy season.

The potholes and dilapidated condition of the roads have been hampering traffic movement resulting in traffic congestion, causing damage to vehicles and immense sufferings to the commuters, said the sources.

The city dwellers alleged that Cwasa dug the roads ensuring alternative way in the past. But, now they stopped traffic movement in some areas for the project works.

The Cwasa kept traffic movement suspended through the busy Jamal Khan intersection to Gani Bakery intersection for around one month.

Students of the institutions and their guardians bear the burn of suspension of traffic movement through the road.

Besides, the road also becomes full of mud after rainfall and people even cannot walk through it at that time.

The flying dust due to the digging work without protective measures also causes air pollution throughout the city.

On the other hand, some roads remained in dilapidated conditions due to delay in repair works by the CCC.

The roads include Port Connecting Road, Agrabad Access Road, Bahoddarhat to Kaptai Raster Matha, Cement Crossing to Patenga and Khawja Road among others.

Drivers of vehicles said the dilapidated conditions of the roads are causing damages to the vehicles very often and increasing the maintenance cost.

Besides, they also cannot make sufficient trips due to the bad road condition and traffic congestion, they said.

Chattogram Metropolitan Police (CMP) Commissioner Mahabubor Rahman told the daily sun that they have to control the traffic movement with the worst road conditions every day.

“We cannot ensure smooth movement of the vehicles on the roads. We asked all concerned departments to ensure coordination for the project works to reduce public sufferings,” he said.

“The Cwasa also pays amount less than the required ones for repairing the roads and it also causes delay,” said the chief engineer.

He also laid emphasis on coordination among all the government agencies to lessen the sufferings of city dwellers.

Cwasa Managing Director AKM Fazlullah said the project works are being carried out to address the water crisis of the city.

“People will get 42 core litres of water per day after completion of the projects and we are working round-the-clock to complete the projects within deadline,” he added.

At present, works are going on at Muradpur to Mirjarpole, Panchlaish Police station intersection to Katalganj, Chawk Bazar to Gani Bakery, Cheragi Pahar to Buddha Mandir, Nandan Kanan to New Market, Kata Pahar to Bose Brothers intersection, Surson Road and Sadarghat to Barik Building among others.

“CCC is trying to repair the roads as early as possible after completion of project works by the Cwasa,” he said.

Sources also hinted that the Cwasa will carry out the digging activities again for developing sewerage network in the city.