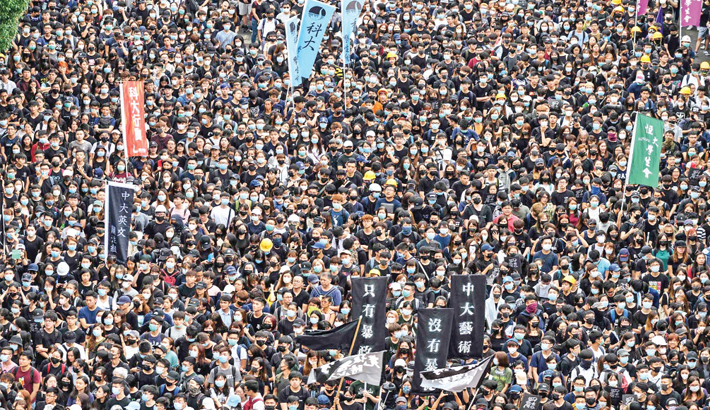 HONG KONG: Thousands of black-clad students rallied in central Hong Kong Monday at the start of a two-week university boycott, piling pressure on the city’s leaders to resolve months of increasingly violent anti-government protests that show no sign of easing, reports AFP.

Students have been the backbone of opposition to government plans to allow extraditions to China, a movement that has morphed into wider protests against the Beijing-backed territory’s unelected leadership.

Hundreds have been arrested in violent clashes with police, and an increasingly shrill Beijing has labelled protesters “terrorists”, with an editorial by China’s state news agency Sunday warning “the end is coming”.

Chinese foreign ministry spokesman Geng Shuang said Monday the protests had “gone beyond the scope of freedom of assembly and demonstration”.

“They have evolved into extreme acts of violence, seriously challenging the legal system and social order of Hong Kong,” he told a

Hong Kong enjoys freedoms unseen on the Chinese mainland under the “one country, two systems” banner inherited following the handover from Britain in 1997, but locals fear those rights are being eroded.

On Monday, as universities reopened after the summer break, thousands of students skipped classes and gathered instead in central Hong Kong.

“Today is the first day of school, but I still want to come out,” a 19-year-old university student named Tommy told AFP. “I don’t think we will miss anything. This is also a form of learning.”