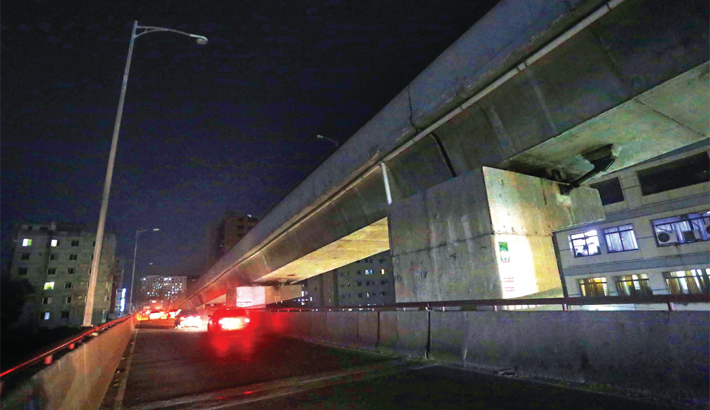 As lamp-posts on Moghbazar-Mouchak flyover in the capital remain inoperative, criminals roam around the flyover at night. Various crimes are taking place in the dark due to lack of security measures. The photo was taken on Sunday night. — sun photo

Most of the flyovers in the capital have become safe havens for criminals due to lack of security measures and surveillance.

Though the city’s flyovers have eased the capital’s nagging traffic problem, security of passengers on the flyovers has become a great concern.

Various crimes like mugging and killing  are frequently being reported in and around the flyovers.

Moghbazar-Mouchak, Khilgaon, Jatrabari, Babubazar and Kuril flyovers are the most vulnerable to mugging, car jacking and harassment of women, many city dwellers said.

The miscreants are using flyovers as safe places for committing crimes due to lack of surveillance by law enforcers, they added.

Mamun Hossain, a resident of Malibagh, said Malibagh flyover becomes more frightening and risky for users at night. Criminals roam around the flyover at night. Youths are often found driving cars and bikes on the flyover at high speed, he added.

He also said drug addicts also take shelter under these flyovers. Some spots underneath the flyovers are used to buy and sell drugs in the morning and evening.

On August 26 night, unidentified miscreants stabbed Milon, a Pathao driver, at the Moghbazar-Malibagh flyover in the capital and took his motorbike and mobile phone. He was sent to the hospital after the incident and died while undergoing treatment.

Shahjahanpur Police Station Officer-in-Charge, Mohammad Shahid, said “Initially, it seemed to be a case of robbery. Flyover CC camera footage is being collected to investigate the incident.”

Sources said mugging and snatching on the flyover was nothing new. As the night falls, parts of the flyovers are occupied by robbers.

Seven flyovers, including the capital’s Moghbazar-Malibagh and Khilgaon, have been identified as hotspots of mugging.

Sources said on an average, 20 mugging incidents take place in Mohakhali, Mouchak and Mayor Hanif flyover every day. But most victims do not complain to the police station.

In July, a private bank official Abulla Al Mamun, was returning home at night through Mayor Hanif flyover and fell victim of a mugging in Jurain area.

During a visit to Khilgaon flyover on Friday night, no police or law enforcement member was seen in the flyover. Some spots were dark as the street lamps were not working. Also, the lights on the flyovers were not sufficiently bright.     Sources said snatchers mainly target people passing through the flyovers at dead of the night when the movement of vehicles becomes thin.

Most of the city foot-over bridges also remain blanketed in thick darkness when night falls. Due to the darkness and haunting environment, criminals can lurk in these areas uncontrolled.

Commuters are compelled to move along the flyover every night risking their lives.