Evil forces become active in the month of mourning: Quader 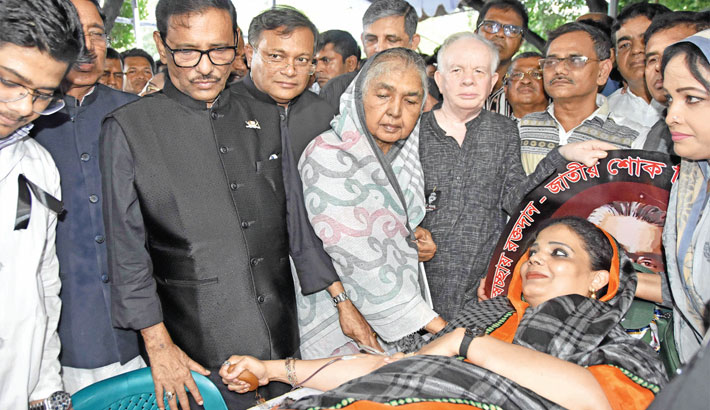 “Anarchists become active in the month of mourning. There is a pain of losses and we also fear to lose in this month,” he said.

Quader, also the Road Transport and Bridges Minister, said this while addressing the inaugural ceremony of a month-long art exhibition at Bangladesh Shilpakala Academy auditorium in the capital.

Quader urged leaders and activists to remain alert against the communal forces so that they could not create any unwanted situation in the country.

The minister said BNP founder Ziaur Rahman not only rewarded and rehabilitated the killers of Bangabandhu but also enacted the Indemnity Ordinance to give them immunity from legal action.

“We know who were behind the killing of Bangabandhu. The people who killed Bangabandhu and those who patronised the killers are guilty equally,” he said.

Quader said it is difficult for the AL to build relations with those who celebrate birthday by cutting cakes on the day of mourning.

“Despite the August 15 tragedy, we wanted to keep ties with different political parties in the greater interest of democracy and good governance. But, how could we keep relations with those who celebrate birthday on the mourning day, adding to our internal breeding?” he said.

Referring to recent dengue outbreaks, the minister acknowledged that the situation is alarming but not out of control.

“Whatever you called it an epidemic or not but we are working on it. Situation is alarming. Tough to face but it is not out of control,” he said.

Juba League chairman Omar Faruque Chowdhury and its general secretary Harunur Rashid, among others, spoke on the occasion.