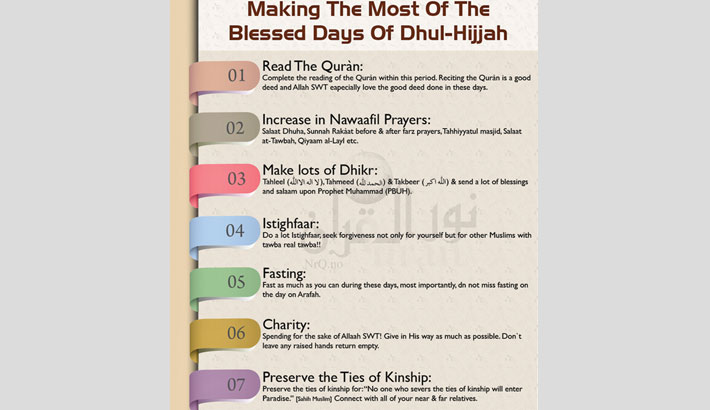 There are four months that are sacred and honourable according to the law of Islam, and one of these sacred months is Zilhaj. Zilhaj is very important for worship. First ten days of this month are most beautiful and dignified period. Because, the first ten days are the great season of worship, which Allah (SWT) has favoured over other days of the year. For these reasons these days are better than the other days of the month, even some scholars have ruled that these ten days are better than the final ten days of Ramadan, although the nights of Ramaḍan are superior to these nights.

Allah Himself swears by 'the ten nights' in Surat al-Fajr, which is a sufficient evidence of their greatness. (Sura Fajar, Ayat 1-2).

So the Muslim should start these days with sincere repentance to Allah, then he should do a lot of righteous deeds in general, then he should pay attention to doing the following deeds:

Fasting in nine days except day of Eid 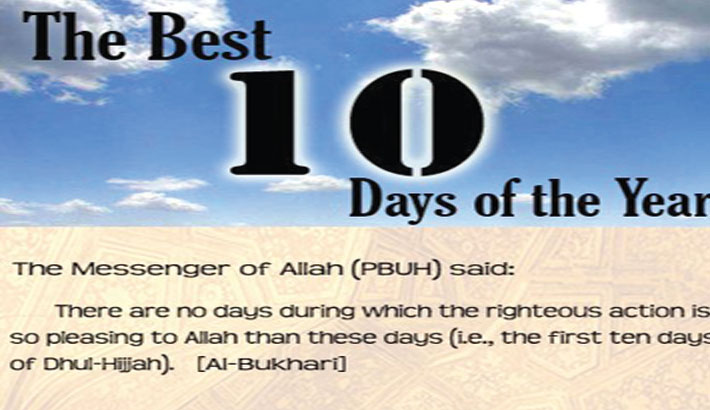 According to another hadith, "The person who fasts on the day of Arafah his sins will be forgiven for two consecutive years." (Musnad Abu Yala, Hadith: 7548; Majmaw Jawid, Hadith: 5141). Those who will not be able to fast on the first ten days of Zilhaj they should not be deprived of at least this day's fasting.

It is Sunnah to recite takbeer (saying Allahu akbar (Allaah is most great)), tahmeed (saying al-hamdu Lillah (praise be to Allah)), tahleel (saying Laa ilaha ill-Allah (there is no god but Allah)) and tasbeeh (saying Subhan-Allah (glory be to for Allah)), during the first ten days of Zilhaj; saying these words out loud in mosques, homes, streets and every place in which it is permissible to remember Allah is a great act of worship to proclaim the greatness of Allah.

This is why the Prophet (pbuh) said, "We should make abundant tahlil, takbir and taḥmid." (Narrated by Aḥmad).

Sayyiduna Abdullah Ibn Umar (Ra) and Sayyiduna Abu Hurayrah (Ra) would go into the marketplace in these days and raise their voices with the takbīr. The people in the marketplace would then raise their voices with the takbīr in response. Thus the most hated place to Allah, a place where most people are heedless of Him, was filled with His remembrance.

Do not cut hair, nails and any part of skin

If the onset of Dhu’l-Hijjah has been proven and a person wants to offer a sacrifice, it is haraam for him to remove anything from the body.

It is mustahab for every Muslim not to remove anything from the body; to cut hair, nails or any part of his skin. It is not forbidden for them to wear new clothes or to put on henna or perfume, or to be intimate with their wives or have intercourse. It is mustahab after seeing of the moon until they offer a sacrifice.

It was narrated from Umm Salamah (Ra) that the Prophet (pbuh) said, “When you see the new moon of zilhaj, and one of you wants to offer a sacrifice, let him refrain from (removing anything) from his hair or nails.” (Narrated by Muslim, 1977. According to another hadith, “Let him not remove anything of his hair or skin.").

Those who are not able to offer the sacrifice should also follow these instructions. Hazrat Abdullah Ibn Amar (Ra) said that the Prophet (pbuh) said,

"'I have been told about the Day of Sacrifice. Allah (SWT) has fixed it as a Eid for the Ummah.' One person asked, 'O Allah's Messenger! What if I only have one maniha which means only for drinking?' The Messenger of Allah (pbuh) said, 'No; do not offer sacrifice on that day. Rather cut your hair, your nails, clean the wool and the lower wool of the navel on that day. This will be considered as your complete sacrifice to Allah.'" (Musnad Ahmad, Hadith: 6575; Sahih Ibn Hibban, Hadith: 773; Abu Dawood, Hadith: 2789; Sunan Nasai, Hadith: 4365).

That is, those who are not able to offer a sacrifice should share with other Muslims the celebration of Eid and happiness. They will be entitled to have full reward if they follow the instructions.