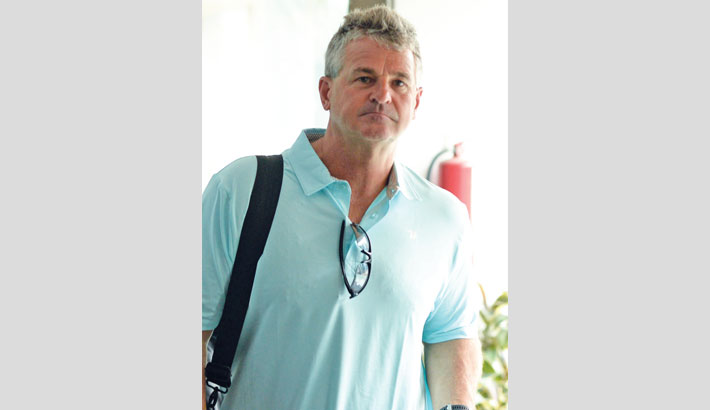 “Give me six months and I will learn Bangla fluently,” Bangladesh’s former head coach Steve Rhodes told reporters after the match against Afghanistan during the ongoing ICC World Cup 2019.

Probably the Englishman hinted that his time as Tigers Head Coach is running out because under usual circumstances if he felt secured about his job he would have stated that I will learn Bangla in the next six months in place of requesting.

He was expected to remain Bangladesh’s Head Coach till ICC T20 World Cup 2020 but this insistence implied all was not well with him and Bangladesh Cricket Board (BCB).

Rhodes’ statement apparently looked sarcastic but it was evident that he received certain indication from BCB high-ups that suggested that the time was running out for him.

The saga eventually ended with BCB terming the process of ending their relationship ‘mutual separation’.

BCB officials coming to England to watch ICC World Cup 2019 were displeased with Rhodes and the reason behind it stated by several BCB high-ups on request of anonymity was that being a gentleman, he looked to have very little control over the players.

If BCB selection policy over coaches is taken into consideration it is not a surprise as former bowling coach Shane Jurgensen, who later acted as interim head coach before losing his job also fell into the same category.

However, BCB and Rhodes looked to be going into separate direction since the last edition of Asia Cup and the distance only grew bigger with passing days.

During the last Asia Cup in Dubai where Bangladesh lost to India in the final on at least two occasions certain things didn’t go as per the guideline of Rhodes.

It was learnt that the head coach was quite unhappy when BCB drafted Soumya Sarkar and Imrul Kayes on SOS basis to join the team after the unfortunate injury of Tamim Iqbal exacerbated by Liton Kumar Das and Nazmul Hossain struggling to provide good starts in the ongoing tournament which forced them to do so.

Rhodes was in favour of a certain replacement but the entire process took place without his knowledge and after seeing the duo he was quite surprised or more precisely shocked.

He did try to raise his voice but it went in vain as he was informed that the decision was taken by BCB high-ups who also did not pay any heed when he wanted to continue with Nazmul Hassan in the playing eleven despite his poor form as he believed the batsman should be given proper amount of opportunity to showcase his potential.

This philosophy of Rhodes- it’s just a game- did not go down well with BCB. The cricket controlling entity of the nation is more comfortable looking at coaches who were scratching their hair after each defeat rather than someone who hardly liked to make noise and give an impression that the world is not in the right place after this outcome.

After a defeat in West Indies, he came up with a similar approach when he was asked to explain the reason behind the loss and it seemed from that day BCB high-ups started doubting his coaching philosophy.

Though, according to Shakib Al Hasan the calmness of team management was one of the main reasons behind their success in the ICC World Cup 2019.

“I think our coaching staff deserves much credit. Because what used to happen earlier is that we used to panic in the dressing room. It was a big problem. The good thing now is that our coaching staff remained so calm that (there was) no chance to panic. It’s contagious, it happens naturally. When someone panics another one starts to panic too. They are trying to push this in our dressing room and I think it’s a big reason behind us chasing big totals in this manner,” Shakib told media after they defeated West Indies in the World Cup.

Team analyst making the plan in the dressing room

It was quite a new experience for the BCB high-ups who had witnessed Hathurusingha making all the calls and looked to exercise much more authority in every decision making process.

According to some, it was a move Rhodes took deliberately as he felt that Chandrasekaran can communicate better with the boys as he is from a sub-continental background.

According to some cricketers, coaching philosophy of Rhodes and Hathurusingha were completely different as far as planning and execution were concerned.

While the Lankan liked to give instructions, Rhodes preferred to answer when someone comes up with his shortcomings as he believed that there is hardly anything to instruct cricketers who are playing international cricketers for so long and it is only right to talk when the cricketers starts doubting his process that had provided dividend earlier.

BCB appointed Rhodes after Hathurusingha abruptly quitted from the post of Head Coach and Rhodes was given the contract with salary of 23,000 dollars per month.

Former South African player and India’s World Cup winning coach Gary Kirsten, who took the advisor role for a remuneration of 30,000 dollars to assist BCB in finding a new head coach after the post went vacant, recommended the Englishman after making a short list after the departure of Hathurusingha. BCB did not want someone to replace Hathurusingha with a similar approach as his rude behavior hurt many people in different roles over the course his tenure.

However, now it seems BCB is missing Hathurusingha’s tough mentality and approach as they are not quite used to deal with a gentleman called Steve Rhodes, who wanted to learn Bangla in six months to communicate better.