The Honourable Finance Minister AHM Mustafa Kamal, known as dynamic and forward looking, placed his maiden budget in the National Parliament on 13 June, 2019, though large portion of budget speech was read by Honourable Prime Minister due to the sickness of Finance Minister. The size of the budget is highest ever in the history of Bangladesh with more realistic targets towards the accomplishment of vision 2021, SDS goals by 2030 and developed country by 2041. The revenue target for this fiscal year has been set at Tk 377,810 crore, which is 17.92 per cent more than that in the last fiscal. In 2018-19, the original revenue target was Tk 339,280 crore, which was 25 per cent higher than that in the previous fiscal year.

The proposed budget includes all areas of the country and the need of farmers, blacksmiths, potters, fishermen, businessmen, bedes, various tribes, third genders, teachers, doctors, engineers and all professionals. The basic principle of tax revenue collection is set only by increasing the tax rate but by widening the tax net and coverage. Revenue offices in every Upazilas and Growth Centres will be established with necessary manpower and other logistics to facilitate revenue collection. The government has a plan to raise the revenue-GDP ratio from its current 10 per cent to 14 per cent in next two years. A number of initiatives will be proposed on a planned tax management steps such as revenue collection has been 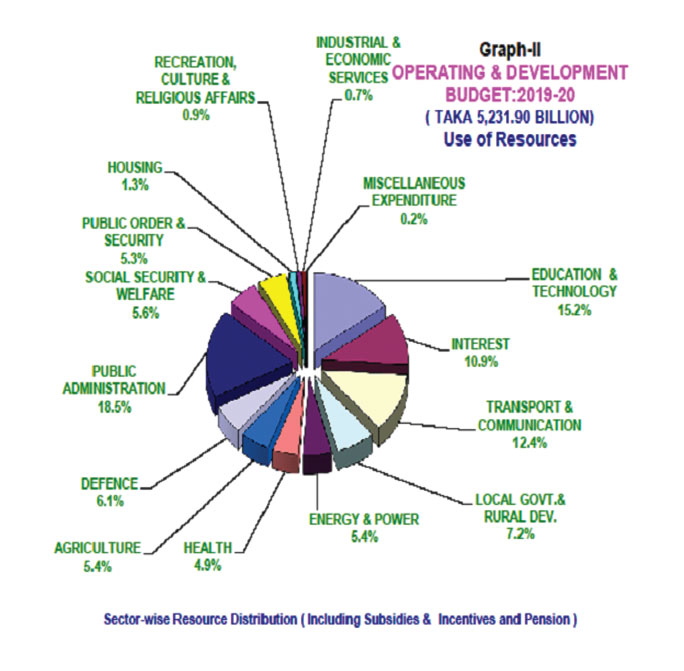 Through this budget, efforts have been proposed to implement the pledges made in Election Manifesto of 2018, 7th FYP and achieve Sustainable Development Goals and their targets. The National Board of Revenue has to collect Tk 325,600 crore, which is around 16.28 per cent higher than the revised collection target of Tk 280,000 crore in the last fiscal year. The size of the proposed budget will grow by 18.22 per cent whereas it was 25 per cent in the outgoing fiscal year. Compared to the GDP, the size of the upcoming budget is 18.1 per cent, down from 18.3 per cent in 2018-19. 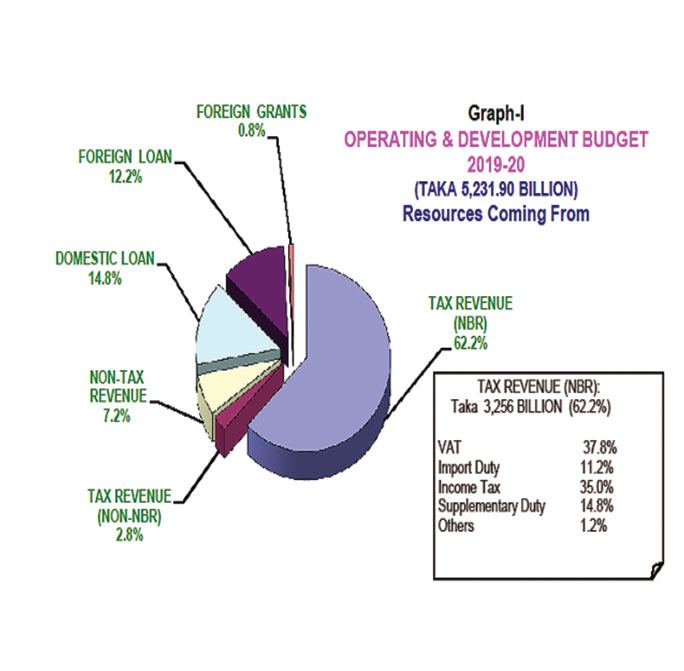 Experts’ view on the proposed big-sized budget is relatively distinguished from previous budgets since the newly elected government would like to continue its priority projects particularly infrastructural and power projects for addressing the most pressing problems currently afflicting the economy.  Prof. Shamsul Alam, Senior Secretary at the Planning Commission, emphasised necessary economic reforms including banking sector for increasing revenue earning in line with the GDP growth.

In the proposed budget some issues are traditional and of compromising nature such as more funds will be injected into state-run banks despite their continued financial irregularities and irresponsible lending practices. In the coming fiscal year, some Tk 1,500 crore will be set aside to bail out these banks. Regarding value added tax (VAT), the government is going to implement the new VAT law. Bangladesh would have been benefited much and be a pioneer in modern VAT system if VAT Law 2012 would be implanted in due course. From the businessmen’s perspectives some issues are not encouraging such as different VAT rates at imports, production, wholesale and retail stages with input credit eligible only for the top 15 per cent rate. This may result reducing VAT to almost like an excise duty.

A number of populist measures are proposed in the budget. It is a good initiative that incentives will be given to remitters for the first time to encourage them to send remittance through official channels instead of via hundi. There will be a separate fund for start-ups to alleviate youth unemployment. Additional 14 lakh people will be brought under the social safety net programmes. One crore new taxpayers will be brought under tax net. The proposed budget may bring smiles to several thousand teachers of private secondary educational institutions working without any pay because the proposed allocation in this sector is likely to allocate Tk 1,150 crore to bring around 3,000 more institutions under the Monthly Pay Order (MPO) scheme, which remained suspended for nine years.

On the expenditure side, the highest expenditure, Tk 69,260 crore, will go for the salary and allowances of government employees. This is 19.43 per cent more than that in the revised budget of outgoing fiscal year. The development budget will also see a rise, by 21.38 per cent to Tk 202,721 crore. The government has already allocated one-fourth of the development budget to 14 mega projects, including Padma Bridge, Metro Rail and Rooppur Nuclear Power Plant.

We know that a budget is not merely a record of revenue receipts and sectoral expenditure; rather it is a comprehensive plan for overall development for a year of a country. Therefore, we hope and expect that the targets of the proposed budget 2019-2020 will be properly implemented particularly ADP implementation, social safety net, health and human capital development so that it could be a milestone towards our journey to 2041- a happy, prosperous and developed Bangladesh.

The writer is an Associate Professor Bangladesh Institute of Governance and Management (BIGM. Email: [email protected]