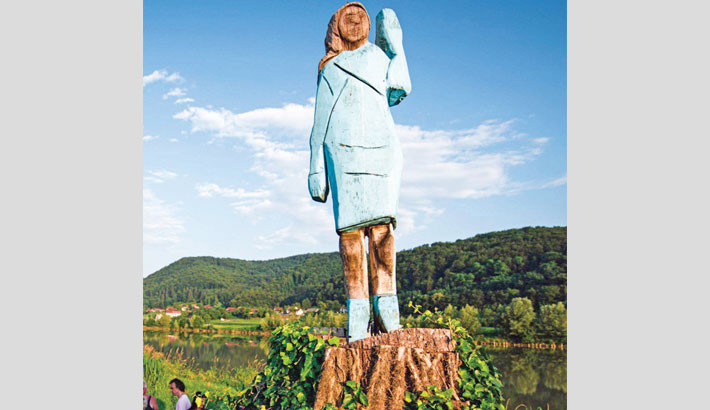 A tongue-in-cheek statue of US First Lady Melania Trump has appeared on the outskirts of her Slovenian hometown, reports BBC.

US artist Brad Downey hired a local chainsaw artisan, Ales Zupevc, to carve the likeness out of a tree trunk outside the town of Sevnica.

The result was a wooden rendering of Mrs Trump dressed in a blue coat with a club-like hand gesturing to the sky.

Some residents described it as “a disgrace”, a “Smurfette”, saying “it doesn’t look anything like Melania”.

Downey told Reuters news agency he wanted to “have a dialogue” with the US political situation.

The artist has an exhibition in Slovenia’s capital Ljubljana until late August. The gallery reportedly suggested the statue “might only be a slapstick prank” in a leaflet.

Sevnica has become a tourist magnet ever since Donald Trump was elected US president in 2016, and Ms Trump - a famous former resident - became the first lady.

As visitors search for an insight into Mrs Trump’s early years, residents have brought out ranges of Melania-branded merchandise including slippers, cake, and Trump-like burgers with fly-away cheese “hair”. While for some, the new sculpture is a step too far, Katarina, 66, told AFP news agency it was a “good idea” to have the artwork, adding: “Melania is a Slovenian hero, she’s made it to the top in the US.”