Atanu reveals how Jaya came on board for Binisutoy 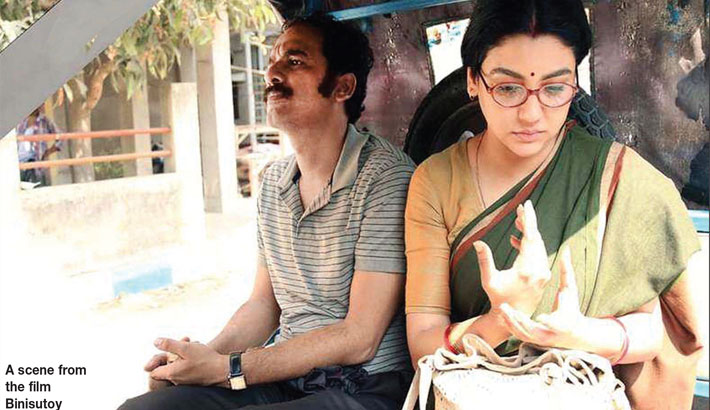 Within a span of six years, Jaya Ahsan has managed to team up with almost all acclaimed directors of Tollywood. The list includes big names like Srijit Mukherji, Kaushik Ganguly, Arindam Sil, Nandita Roy-Shiboprosad Mukherjee and Atanu Ghosh, reports Times of Inidia.

Jaya’s next film ‘Binisutoy’ sees the versatile actress pairing up with Ritwick Chakraborty as the lead pair for the first time. The film’s story penned by Atanu himself sheds light on the eternal quest for an alternative lifestyle.

So, how Jaya Ahsan came on board for ‘Binisutoy’? Atanu Ghosh explains the Bangladeshi actress can deliver a wide range of expressions just like the characters she essay.

“An actor should effortlessly dwell into his or her own private moments and spaces and bring out unpredictable nuances that enrich the character. Jaya does that commendably. Besides, she can deliver a wide range of expressions — from typical simplicity and vulnerability to strong will, determination and strength of character. All these are principal constituents of Sraboni’s character in Binisutoy. Besides, her facial features and vocal intonation tally perfectly with the Assamese lineage of the character,” said the national Award-winning director.

What’s more interesting apart from the unusual pair of Riwick and Jaya is that we would get to see Jaya Ahsan’s singing talent as well in the film. Despite not being a trained singer, her character in ‘Binisutoy’ demands her to sing.

Speaking about her small singing part, the Bangladeshi actress had earlier told us: “As a child, my parents used to train me in music like any other parents who love to see their children learning art and crafts. So, the few music lessons I received are the only knowledge I have while preparing for ‘Binishutoy’ singing part. I said yes because it’s part of the character. I believe the portrayal won’t be realistic if someone else gives voice to the songs. I have previously sung in a Bangladeshi film ‘Dubshatar’ and it was more of singing in the bathroom. Here, the situation is almost the same.”

Beside Jaya Ahsan and Ritwick, the film has an ensemble cast including Kaushik Sen, Chandrayee Ghosh, Kheya Chattopadhyay and others in important roles.