Mashrafe not worried to take on India 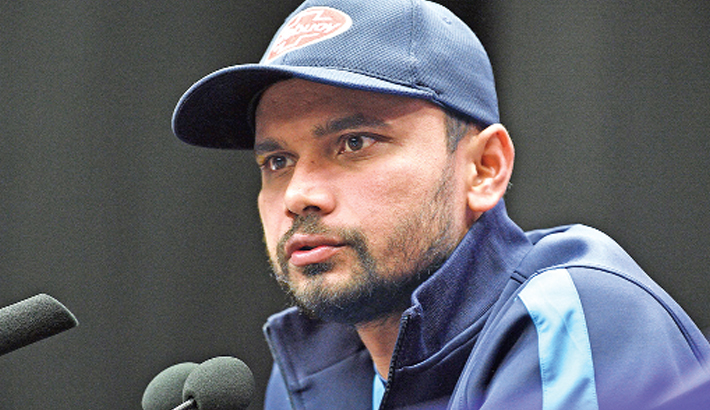 Bangladesh skipper Mashrafe Mortaza said that he is not interested to lose his sleep thinking too much about India as they head to take on one of the tournament favourites in their ICC World Cup 2019 fixture at Edgbaston on Tuesday.

Bangladesh are determined to give their best shot in a bid to keep their World Cup hopes alive as they take on India to overcome the first hurdle.

England’s victory over India left Bangladesh in a tricky situation as far as their semifinal berth is concerned but for the time being Tigers have put the calculation to rest.

Tigers now need to win their match against India and pray for a defeat of England at the hands of New Zealand on July 3. But if England win this match, Bangladesh will be eliminated from the race even before their last match against Pakistan on July 5 at Lord’s.

But Tigers look determined to not bog their minds with the equations of probability and focus on something which can be affected by their efforts which is their match against India.

They are in fact oozing with confidence even though they didn’t win any match against India in any format of cricket since their landmark bilateral ODI series victory in 2015.

“I don’t think of too far. We have to be at our best. If we can manage to win, that will be great, but to be honest, both sides competing in the match are very strong,” Mashrafe told reporters on Monday.

“We have to think about tomorrow (Tuesday). India are a very strong side in this World Cup, and it’s not going to be easy, but we have to play hard and have to give your 100 percent in every aspect of the game. It helps that we still have some chance to advance to semi-finals. Maybe we will go through, maybe we will not, but let’s see. We have to play a lot better than what we have played so far,” he said.

“Every time we take to the field, we had only one target and that is to win. But India in the last few World Cups were just a better side and their team were a very very strong side. To be honest, we go out onto the field to play at our best, and let’s see,” he said.

“You never know. If you have a very good day, perform well in all three aspects of the game and if we can perfectly execute our plans, then you never know. It’s a sport in which in your day you can beat anybody,” he added.

Tigers focus will be to take out India’s top order as early possible. Even though they conceded 337 runs against England, India’s bowling line-up is one of the most lethal in the World Cup. But Bangladesh looked set not to waste much thought to Indian bowling line-up. According to Soumya Sarkar and Mosaddek Hossain, Tigers are not wary of India’s bowling.

Jasprit Bumrah and the Indian spinners might be tougher to deal with for other teams but Liton Das showed how to neuralise them in the Asia Cup final. From that experience, Bangladesh have earned the confidence to deal with Bumrah and co comprehensively.

While there are many ifs and buts, the fans went abuzz and keep the things heated up like the past in the social media platforms. Obviously the no-ball saga of ICC World Cup 2015 once again came to the fore.

Bangladeshi fans still believe that if Rohit Sharma was given out off the delivery frp, fast bowler Rubel Hossain, Tigers could have beat India to reach the ICC World Cup 2015 semifinal.

Bangladesh and India so far faced off each other 35 times in ODI cricket in which India won 29 times in contrast of Bangladesh’s five.

However, in World Cups they took on India thrice India winning two but Bangladesh drew the first blood in their first meeting in cricket’s biggest carnival. That was in 2007 when a young Bangladeshi side, comprised with the rookie like Tamim Iqbal, Shakib Al Hasan and Mushfiqur Rahim stunned India by seven wickets, showing a sheering audacity.  Particularly Tamim’ straight six off Zaheer Khan went into the World Cup cricket’s folklore.

“As I said, it is going to be very hard, but we have to be at our best,” told Mashrafe.

“No, I don’t think it’s psychological. It’s all about skill. Obviously, cricket is a psychological game,” said Mashrafe.

“Fans get carried away. But I don’t think it works in our minds down in the middle when we are playing. But the support we have got so far has helped us a lot to handle the pressure well while playing,” he said.

“So it varies from man to man how a person will handle pressure. There’s always pressure in the field. It’s a good thing that fans are supporting us throughout the tournament,” he said.

“Obviously, fans want us to win which is normal I think. Obviously, Indian fans will support India, and they also want to win. The 11 players who play on the ground are in a difficult situation, they feel the pressure,” he added.