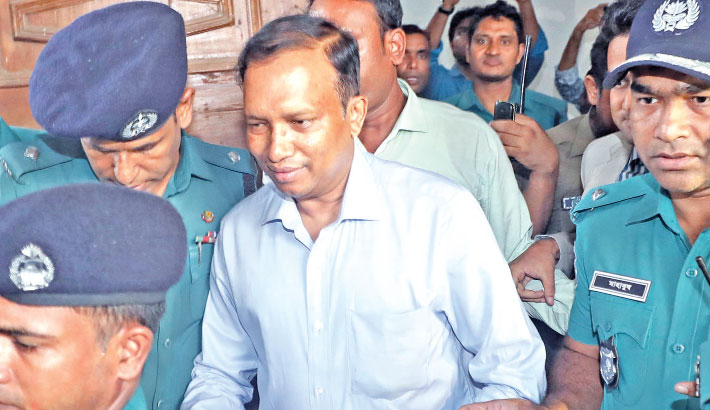 The much talked about Deputy Inspector of Police (DIG) Mizan Rahman would be produced before a lower court today as per the order of the High Court which rejected an anticipatory bail petition filed by the accused in a graft case.

Replying to a query, Sohel Rana, AIG (Media) of Police Headquarters, told the Daily Sun that “We will comply with the High Court order.”

Abul Hossain, Officer-in-Charge of Shahbagh Police Station, said “We will produce DIG Mizanur Rahman before the court on Tuesday morning.”

While rejecting the bail petition, the High Court said DIG Mizan “totally tarnished the image of the police” by making “desperate comments” that he bribed a director of the Anti-Corruption Commission.

On Sunday, DIG Mizan filed the anticipatory bail petition with the High Court.

Earlier on June 24, the Anti-Corruption Commission (ACC)  filed a case against him, his wife, brother and nephew accusing them of amassing illegal wealth.

DIG Mizan was scheduled to appear at the ACC headquarters on Monday, but he did not do it, citing his “personal reasons”.

ACC summoned him to its headquarters to question him about the bribe of Tk4 million that he allegedly paid to ACC Director Enamul Basir.

Earlier, ACC Director Manjur Morshed filed the case against him.

The ACC found evidence of Mizanur’s illegal assets worth over Tk 30.7 million.

DIG Mizanur, in a television interview claimed that Basir took the bribes from him promising that he would be given a clean chit.

Mizan is also facing allegation of abducting a woman and marrying her forcibly, despite having a wife and children.