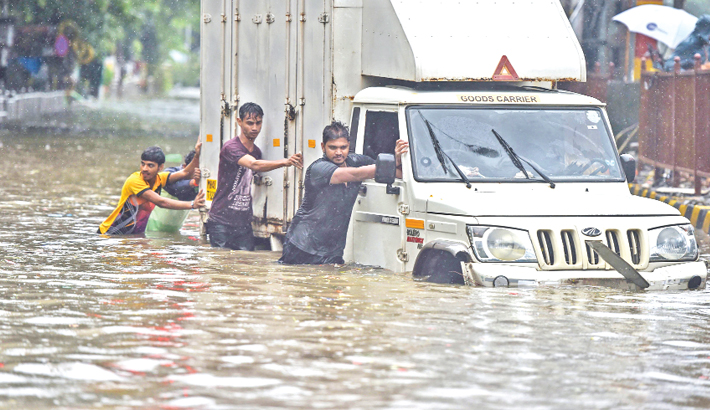 Indian men push a truck along a flooded street after heavy rain showers in Mumbai on Monday. —AFP PHOTO

Children were seen wading through waist-high waters as they made their way to school, while some motorists were forced to get out and push their vehicles through low-lying streets.

Trains on Mumbai’s colonial-era rail network, a lifeline for the city’s 20 million residents, were delayed due to waterlogged tracks, and traffic moved even more slowly than usual.

Mumbai’s streets regularly flood during the monsoon, which runs from June until September or October, and which provides India with most of its annual rainfall.

In 2005, 950 millimetres (37 inches) of rain fell on the coastal metropolis in just 24 hours, killing more than 500 people. In August 2017, intense rainfall brought the commercial hub to a virtual standstill for two days and left at least 10 people dead.

Activists say Mumbai’s susceptibility to floods has worsened in recent years due to a construction boom that is trying to keep up with the city’s swelling population. Much of Mumbai’s mangrove cover, which is extremely effective in helping to drain water, has been destroyed over the past decade to make way for glitzy high-rises.

According to various studies, anywhere between 40 to 50 percent of the city’s population live in slums, which become a sea of blue tarpaulin every monsoon as residents try to keep out the rain. The downpour follows a period in which large parts of the country endured weeks of sweltering heat—with temperatures rising above 50 degrees Celsius (122 Fahrenheit) in the desert state of Rajasthan.